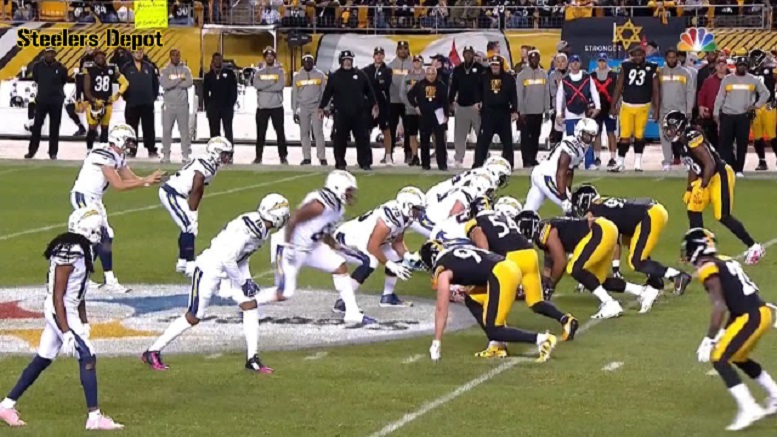 While the Pittsburgh Steelers offense managed to get off to a quick start in Sunday’s home loss to the Los Angeles Chargers, their opponents’ offensive tackles had even quicker get-offs for most of the first half with the most obvious time coming during Los Angeles’ first touchdown of the game.

While you have probably already seen the non-called false start by Chargers right tackle Sam Tevi by now, you can watch it again from several different angles in the gif below if you so choose.

After the game was over, Steelers head coach Mike Tomlin was asked to reveal what explanation he was given for Tevi not being called for clearly false starting on the touchdown pass from Chargers quarterback Philip Rivers to wide receiver Travis Benjamin with 1:04 left in the first quarter.

“It was no explanation than they missed it,” Tomlin said. “It’s unfortunate.”

It was indeed unfortunate for the Steelers and it’s not like the Chargers haven’t already been the beneficiary of a missed false start that happened during a touchdown pass play this season. In case you forgot, referees missed Chargers left tackle Russell Okung false starting during the Week 6 game against the Cleveland Browns on a play that resulted in a touchdown. The missed false start resulted in the NFL firing of Hugo Cruz, a down judge. You can watch the start of that touchdown pass play below via gif format in case you forgot.

While the Tevi non-call was very egregious Sunday night, its not like both chargers tackles didn’t flirt with false starts several times during the contest. In fact, I have a nice collection of other questionable get-offs that happened in the first half. A few happened prior to the touchdown play with a few others coming in the second quarter.

Of the group of selected plays below, most of them probably shouldn’t have been flagged and especially when compared to the one that took place during the touchdown..

The Steelers certainly didn’t lose their game to the Chargers just because a few penalties weren’t called but even so, those referee mistakes surely didn’t help.

Let me know what you think about the collection of get-offs below.