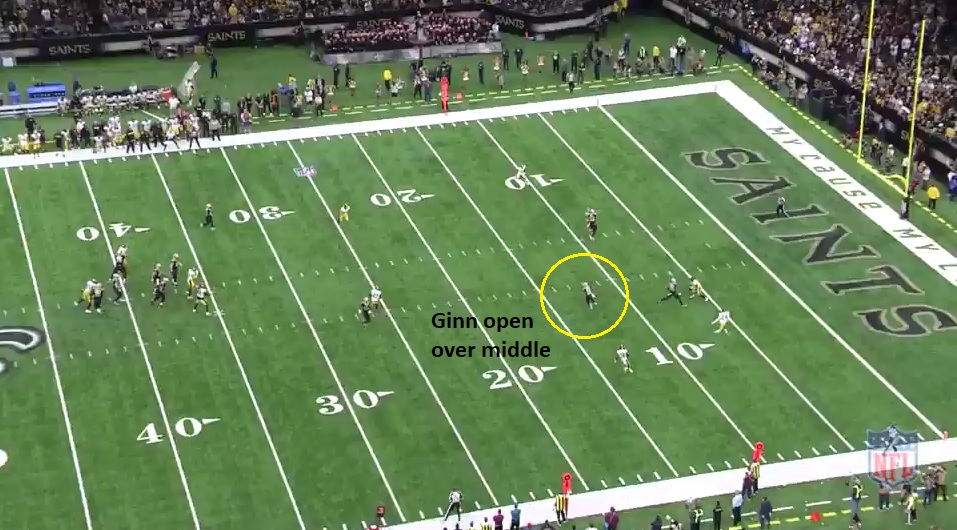 Late in the Pittsburgh Steelers Sunday road loss to the New Orleans Saints the team’s defense gave up a 3rd and 20 conversion with 1:41 left in the fourth quarter. And while that single play wasn’t the sole reason why the Steelers lost that game, it certainly played a large part in it as the Saints scored what would turn out to be the game-winning touchdown just two plays later.

On Thursday, Steelers defensive coordinator Keith Butler was asked during his weekly session with the media if any kind of defensive miscommunication played a role in his unit giving up that 3rd and 20 conversion via a deep pass in the middle of the field from Saints quarterback Drew Brees to wide receiver Ted Ginn Jr. and he said that there wasn’t.

“No, we didn’t cover the things that we wanted to cover,” Butler said. “We jumped some things that we didn’t want to jump. They had some guys in position that looked appealing for us to jump and we did. We didn’t miss a coverage, we just didn’t play it the way we should’ve played it. We could have coached a lot better than we did.”

Our very own Alex Kozora has already broken down for you that 3rd and 20 conversion the Saints had on Sunday that included them using the dagger concept and Butler talked a little more about what led to his defense giving up that 25-yard completion on Thursday.

Film Room: Saints Use Figurative And Literal Dagger To Beat The Steelers

“Again, we have to do a better job of making sure our guys are in tune with the sticks and what they were trying to do and stuff like that,” Butler said Thursday. “That 3rd-and-20 hurt us a little bit but I don’t know if it beat us. It did beat us at the end, but the penalties hurt us quite a bit, too. I think our guys played hard in that game. They were trying to be competitive and we just have to cover a little bit better.”

Butler didn’t name any names on Thursday but being as he mentioned there were routes jumped that shouldn’t have been jumped, it’s probably a good bet that he was talking about safety Morgan Burnett, who was essentially a linebacker in that zone coverage on that 3rd and 20 play. Burnett got sucked in by the underneath crossing route instead of getting depth in the middle of the field to help take away a deep in-breaking route, or at the very least, make Brees put a little more air on his throw. In that defensive quarters coverage on that particular down and distance, Butler was probably fine with Brees throwing to the underneath crosser with hopes that a tackle would happen well before the receiver gained 20 yards.

For what it’s worth, and it’s not much, Pro Football Focus assigned the blame to Burnett for the 3rd and 20 completion to Ginn.

Butler’s right when he said that they could have coached it better than they did and unfortunately we can say that about a lot of defensive plays this season. In the end, all of this poor coaching could wind up costing Butler and a few other defensive coaches their jobs very soon and especially if the Steelers fail to to make the playoffs on Sunday which will indeed happen unless they beat the Cincinnati Bengals and the Cleveland Browns beat the Baltimore Ravens.