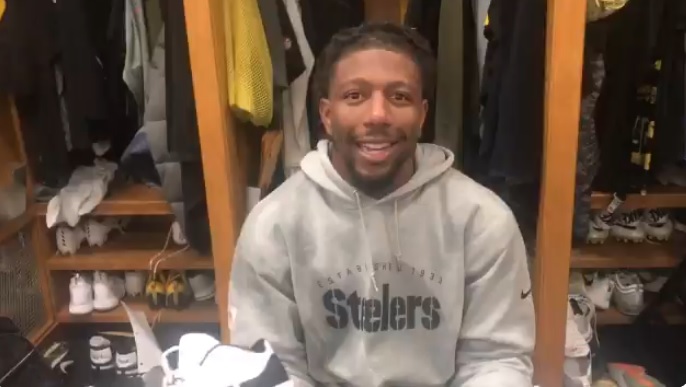 The Pittsburgh Steelers’ locker room is taking advantage of Le’Veon Bell’s absence. With the knowledge his season – and career – in Pittsburgh is over, they’re acting more like the Pittsburgh Pirates. ESPN’s Jeremy Fowler posted this video of the locker room raiding Bell’s locker, removing his nameplate and stealing his Jordans.

“I appreciate the cleats, my guy,” Dupree says in the video while holding up Bell’s cleats. “I hope you the best, I wish you success, my guy.”

Bell declined to report by Tuesday’s 4 PM deadline, making him ineligible for the rest of the season. Today was the first day of practice the Steelers had and the first chance to get a reaction from the locker room. A group rightfully in high spirits. They’re riding a five game win streak and following Thursday’s blowout victory of the Carolina Panthers, Mike Tomlin gave the team off until today. Listening to post-game interviews, players seemed more happy about that than the win.

Of course, this is all good-natured ribbing that’s become common place in the locker room. A group where no one is safe. If you can be made fun of, you will be made fun of.

“You can turn a joke into anything [around here],” Anthony Chickillo told Fowler in an ESPN article last year. “Even when stuff is going on, everyone knew our goal. It’s always about winning. That’s it.”

That was referencing all the drama of 2017. Antonio Brown’s anger, Martavis Bryant’s Instagram/trade comments (the team clowned him for it), the national anthem debate. All of which was internalized, handled, and the locker room became closer because of it. Anthem controversy aside, these issues are much bigger to the public than they are to the team.

Honestly, the same story seems to play out every year in Pittsburgh. Slow start, locker room drama, NFL pundits openly wondering if Tomlin has lost the locker room, if everything can be put back together. Then the Steelers go off on a big win streak and cruise to an AFC North title. Rinse, repeat, just like this year.

The only difference? Bell’s going to need to get some new cleats. Without earning a paycheck, I recommend waiting for those Black Friday sales.