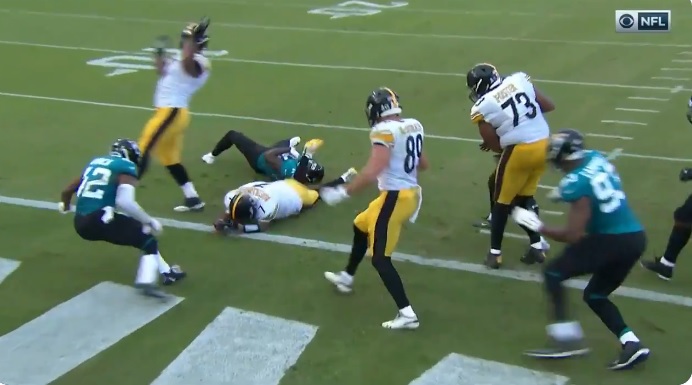 I had a very snarky headline for this article from about the mid third quarter on. I regret my snark.

Your Steelers vs Jaguars winners and losers.

Javon Hargrave: Hargrave did miss out on a third sack but any two sack performance by a Steelers’ nose tackle is one worth noting. He dusted the backup right guard, used in nickel packages with Stephon Tuitt out. That’s one reason why Daniel McCullers started and played in their base 3-4.

T.J. Watt: Watt did notch his 9th sack of the season, beating a double-team and forcing a fumble on a crucial third down to force a Jacksonville punt. Reader reminded me Watt was credited with a sack on the final play of the game. So that gives him ten this year.

Antonio Brown: Searching between the couch cushions for winners today (Ed note: written in the early 4th quarter. Don’t yell at me). Jalen Ramsey locked Brown up pretty good but AB provided the offense with one ray of sunshine, getting himself wide open on a deep post for a 78 yard touchdown and the Steelers first score of the day.

Vance McDonald: McDonald made an incredible catch to make this one a game, leaping in the back of the end zone and snagging it over Telvin Smith’s head. Getting him involved in the red zone has been big the last two weeks. Happy to see it.

Ben Roethlisberger: I don’t even know where to put him. He was squarely on my losers list for 90% of this game. But he led the comeback, made some key throws to JuJu Smith-Schuster late, and then made something out of the broken shovel pass to dive across the goal line to win the game. Wow.

JuJu Smith-Schuster: He was quiet throughout but that was more on Ben throwing hospital balls until the end. He made two clutch catches in the fourth quarter, a back shoulder throw against Jalen Ramsey and a double-move downfield to set up the game-winning touchdown. This dude is so tough, mentally and physically.

Run Defense (Late In the Game): Keith Butler tried a lot of things to make the run game work. Blitzing ILBs, playing their over front they shelved all year. Finally, he went with a “big base” bringing in safety Jordan Dangerfield and that seemed to do the trick. Stuffed the Jags late. Credit to Vince Williams, who made a critical third down stop to give the ball back to the offense.

Sean Davis: The defense wasn’t great today but it’s hard to blame them for everything that went wrong. They were on the field far too much, especially in the first half. That can lead to tired bodies and Davis seemed gassed in particular. He wasn’t bad in the passing game, I mean, Jacksonville didn’t even try to push the football, but he missed several tackles as the third-level defender in the run game. Throughout much of this year, his tackling had been reliable and physical so today was a disappointment.

Third Down Offense: Really, much of what went wrong on offense was an offshoot of Roethlisberger playing like Nathan Peterman. But third down certainly suffered, a unit that had been #1 in the league during the five-game winning streak. At its worst, they were 1/9 and finished things 3/11.

James Conner: I try not to put people on lists for just one bad play but Conner’s 4th down drop with the Steelers driving mid-fourth quarter was a killer. He made you forget about that one with a would-be touchdown on a vertical route down the left sideline in the 4th quarter, too. He didn’t find success on the ground either, though that was largely no fault of his own. As a whole, probably his worst game of the season.