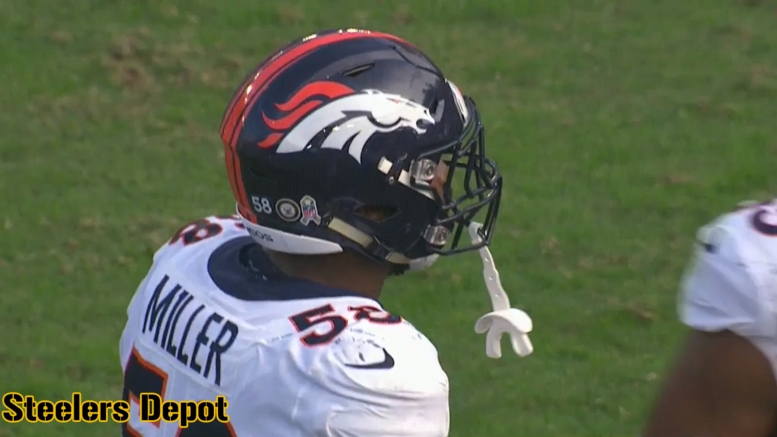 The Pittsburgh Steelers have a potential minor crisis on their hands at the moment at the right tackle spot with both their starting right tackle Marcus Gilbert, and their primary backup tackle, Matt Feiler, sidelined with injuries. In the event that neither of them are able to return by the end of the week, rookie Chukwuma Okorafor would be in line to make his first career start.

But no matter who ends up playing at the right tackle spot, it doesn’t change a lot what the team plans to do with respect to countering the Denver Broncos’ elite pass-rusher, Von Miller, who is a former Defensive Rookie of the Year and a rare defensive Super Bowl MVP, a six-time All-Pro selection to boot.

Chubb would be Bradley Chubb, the Broncos’ fifth-overall draft pick this year, who has nine sacks already to Miller’s 10. Tomlin credited Miller in helping the rookie hit the ground running. “You see his mentorship in the growth and development of Bradley Chubb, who’s a rookie who’s got nine sacks I think already”, he said. “Put that in perspective, I think [T.J. Watt]. only had seven or eight through all the games a year ago”.

Tomlin struggled to keep himself from lavishing praise on Miller, whom he got the opportunity to coach during the Pro Bowl earlier this year. “He’s a special player. He’s aware. He’s physically talented. He’s intelligent”, he said. “He’s a scientist in his approach to his craft. It was obvious in terms of watching him interact with the other Pro Bowlers, just talking about the nature of the [pass] rush and things of that nature. Just really impressive professional”.

To be fair, the last time the Steelers and Gilbert faced Miller and the Broncos, the All-Pro was actually held without a statistic throughout the game back in 2015. Not one sack, nor tackle, nor pass defensed. While that doesn’t tell the full story, they certainly prevented him from taking over the game.

That will be more difficult if it’s Okorafor out there and not Gilbert, or even Feiler, but the Steelers know that they have to take steps to minimize him, all the while not forgetting about Chubb, and Shane Ray. As a team, the Broncos rank seventh in sacks with 31, only one fewer than the two teams tied for fifth place.