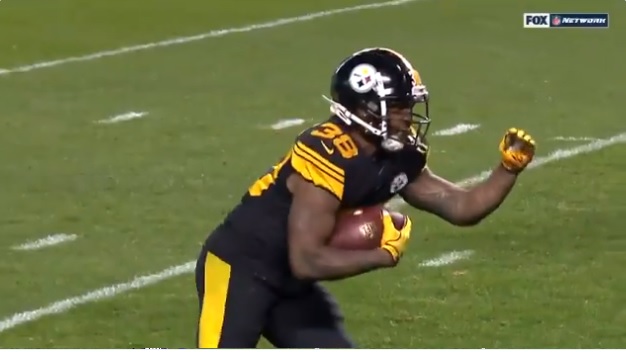 – Let’s begin with the score. The 52 points the Pittsburgh Steelers put up tonight are tied for the most since the 1970 merger. They also had 52 in a victory over the Chargers in 1984. The franchise record, if you’re wondering, is 63.

– Twice tonight, the Steelers recorded 50+ yard touchdowns from Antonio Brown and JuJu Smith-Schuster. The last time Pittsburgh has thrown a paid of TDs that far was 1988, when Louis Lipps scored from 65 and 80 yards out in a win over the Houston Oilers.

– Thanks to a touchdown and pick six, the Steelers put up 14 points in the first five minutes. That hasn’t happened to them since 2002, a Monday Night win over Jon Gruden and the Tampa Bay Buccaneers. Antwaan Randle El got the party started with an 11 yard touchdown grab while Chad Scott picked off Shaun King for a 30 yard pick six.

– Nine different Steelers caught a pass tonight. Not sure if that’s a record but sure feels like it.

– Also twice this year, a Steeler has a sack and pick six in the same year. Both linebackers: Bud Dupree vs Tampa and VW tonight. Hasn’t happened since Rod Woodson did so in two games back in ’94.

– Their 31 first half points are the most in a game since notching 35 on the Colts back in 2014. Finished that game with 51 points. One better tonight.

– Of Steelers’ quarterbacks with at least 25 attempts, Roethlisberger’s 88% completion rate (22/25) is a franchise record. I know you won’t believe this but Landry Jones had the previous record, 23/27 against the Browns last year.

– During Pittsburgh’s five game win streak, the Steelers are 62.1% on third down. Incredible.