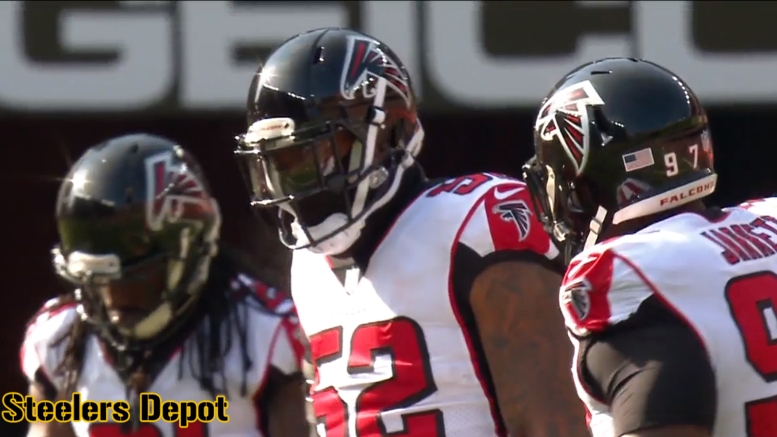 Pittsburgh Steelers fans will always demand that the front office pursue just about any significant free agent that ever becomes available, whether it is a player that makes sense or not. Some will even choose to conveniently ignore the signings that they do make, such as Joe Haden, and convince themselves that the team never hits the market.

The Steelers, bolstered by weekly salary cap bonuses provided by no-show running back Le’Veon Bell, were said to have gone after one of those significant free agents in the middle of this season when the Oakland Raiders chose to release Bruce Irvin, a pass rusher.

Irvin said himself that the Steelers were among the teams to make offers for him, and even said that they offered more money than the deal that he did sign, but said that the opportunity to play for his Atlanta Falcons was too good to pass up.

It is sometimes hard to take the word of a player, as they generally have it in their interests to make themselves look good. That’s especially the case when that player only signs a one-year deal and will be hitting the open market again. You want to make it sound like you drew up a lot of interest.

According to Bob Labriola, however, the Steelers’ interest in Irvin was genuine. In response to a question during a recent Asked and Answered segment, he told a questioner that “the Steelers in fact were interested in Bruce Irvin and made a serious effort to sign him”.

He did go on to say that he was not able to confirm whether or not the offer that Pittsburgh presented to Irvin was for more money than the contract he signed with the Falcons, but suggested that the team’s history of doing business strongly indicates it was likely a multi-year offer.

The Steelers have played the entirety of the 2018 regular season with just three outside linebackers on the 53-man roster, with Bud Dupree and T.J. Watt in the starting lineup and Anthony Chickillo spelling both of them, so there would obviously be room for an additional pass-rusher.

They also have rookie outside linebacker Olasunkanmi Adeniyi on injured reserve with the eligibility of being designated for return, but the fact that they have yet to do so suggests that they don’t believe he would be a great help toward their efforts this year in the way a veteran such as Irvin would.

It is interesting though that they did go after Irvin, and it indicates that, should a similar opportunity present itself to add to their roster over the course of the second half of the season, they would not hesitate to give it a go and try to add a significant piece that another team decided they could do without.