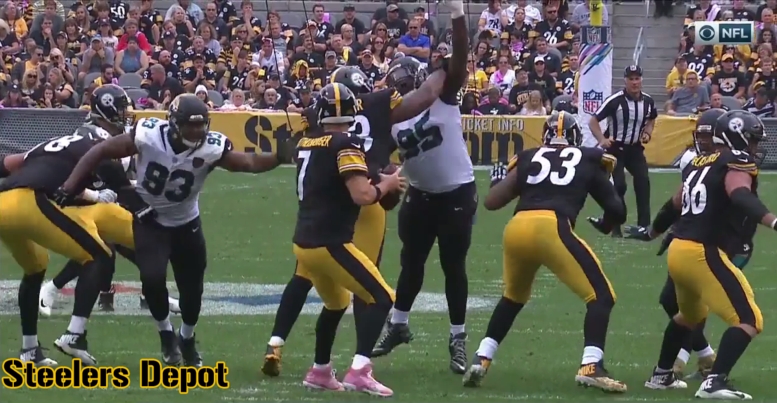 It’s only natural that within any collection of people you are going to find a diversity of opinions, even regarding a shared experience. That is something that we have seen over the course of the past 10 months with respect to the build-up toward the Pittsburgh Steelers’ postseason game against the Jacksonville Jaguars.

One consistency has been David DeCastro, who wasn’t happy with the amount of talking that the team was doing around that time, or at least certain members of the team, and he still to this day wishes that things would have been different.

“I just wish we had been more, I guess, humble before the game and just played the game instead of talking”, he told reporters yesterday in preparation for Sunday’s meeting against the 3-6 Jaguars. “I think talk’s pretty cheap”.

DeCastro has always been the stoic in the locker room, not interested in getting involved in the more emotionally charged aspects of competition—provided that nobody is going after his quarterback of course—so it’s no surprise that he would have preferred the strong, silent approach.

Still, he doesn’t go so far as the blame the loss on the pre-game attitudes, though even Ramon Foster openly wondered about where their collective mindset was at the time and “if last year we thought, ‘hey, lightning won’t strike twice’”.

The Jaguars haven’t been striking much at all this year, entering this game on a five-game losing streak, having gone 1-6 since they defeated the New England Patriots all the way back in Week Two. Of course, they had also been without Leonard Fournette during that streak up until their most recent game.

Still, Foster offered that they were served at least a moment of clarity, which was, “nobody’s gonna lay down for us”. And for his own part, he shouldered the blame.

“We were just bad”, he said of the postseason defeat, pinning much of the issue with the offense’s struggles early on, which resulted in one defensive touchdown and set up another for the offense. “We can’t spot them 21 points. We can’t fall back in games. We can’t be inefficient on offense. We had a lot of bad stuff, especially us on the offense side early on”.

The good news is that they haven’t been taking the ball away as much this year, and in fact have a substantially negative turnover differential, with quarterback Blake Bortles responsible for 11 turnovers himself, eight interceptions and three lost fumbles.

There is no running of the mouth from either side heading into this game. The Steelers, perhaps, because they know this team has dominated them lately. The Jaguars, well, because they have nothing to brag about right now. Just the way DeCastro likes it.