The Pittsburgh Steelers easily took care of the Carolina Panthers Thursday night at home to improve their season record to 6-2-1. Not only that, it was their fifth consecutive win that included their pass defensive playing very well. So, just how good is the Steelers pass defense just past the midway point of their 2018 regular season and can we draw any conclusions from their statistics as it relates to their chances of ultimately winning the Super Bowl in February?

Let’s first look at the defensive ANY/A (adjusted net yards per pass attempt) stats by game for the Steelers so far this season.

As you can see in the table of data above, the Steelers two biggest defensive ANY/A numbers this season were in their two losses to the Kansas City Chiefs and Baltimore Ravens. That big number of 15.24 posted by the Chiefs in Week 2 still has a huge impact on the Steelers season defensive ANY/A stat to date of 6.08 because if you remove it the number drops down to 5.33 and in today’s NFL that’s not a bad number at all. In fact, entering Week 10 the Chicago Bears lead the NFL with a 4.9 defensive ANY/A with the Ravens having the next lowest at 5.3. Entering Thursday night, the Steelers defensive ANY/A stat was 6.28, slightly below the league’s 6.5 average.

In their last five games, all of which were wins, the Steelers pass defense has played really well from an ANY/A stat standpoint. In fact, it’s 5.0 in those last five games and that’s with the unit only registering 2 interceptions in those contests. It can be argued, however, that the Steelers didn’t play any great passing offenses in those five games. Let’s have a look at that argument.

The offensive ANY/A of all NFL teams through the first 9 weeks of the 2018 regular season was 6.5 and the average of the five teams the Steelers just finished beating consecutively entering Week 9 was 6.45. Additionally, only two of those five teams. the Atlanta Falcons and Panthers, had offensive ANY/A numbers greater than 7.0. (see table below) Do keep in mind that these stats include games against the Steelers except for the Panthers and obviously the Steelers have already played the Cleveland Browns and Ravens twice. 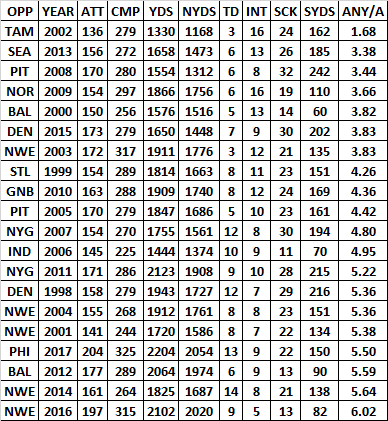 As you can see in the table above, only one team, the 2016 New England Patriots, managed to win the Super Bowl in the last 20 seasons with a defensive ANY/A greater than 5.64 after their first 8 regular season games. Not that it matters, but the Patriots had to overcome a 28-3 deficit in that game. (thanks, Falcons)

If we were to use only the history of defensive ANY/A stats through the first 8 weeks of a regular season, it would be easy to predict that the Steelers 6.28 number through their first 8 regular season games of 2018 is way too high for them to ultimately win the Super Bowl season. However, it’s still hard to overlook that one huge outlier game against the Chiefs and the impact that still has on that 6.28 number.

Personally, and I think many of you will agree with me, we’re really unlikely to know just how good the Steelers pass defense is until they play the Los Angeles Chargers, New England Patriots and New Orleans Saints in the month of December and depending on how the next five weeks play out league-wide, that final game against those three teams might wind up being a meaningless one for one, or perhaps even both, teams when it comes to playoff seeding. Those three teams have a combined record of 20-5 entering Week 10 and below is a look at the offensive ANY/A stats for each along with the averages.

As you can see in the table of data above, the Chargers and Saints both currently sport offensive ANY/A stats over 9 and only two other teams, the Chiefs and Los Angeles Rams, join them in that lofty number. The Chiefs, by the way, currently lead the NFL with a 9.4 offensive ANY/A.

The Steelers can only play the schedule they are given so if they want us to continue to have faith in their defense, that unit should be expected to register under 6.0 defensive ANY/A stats in their next two games against the Jacksonville Jaguars and Denver Broncos and obviously two wins should be expected.

After the Steelers next two games they will have played 11 in total and at that time I’ll update you on their defensive ANY/A stat and take yet another look at how it matches up to past Super Bowl champions. For now, however, consider the jury still being out on just how good the Steelers pass defense is after nine games played.