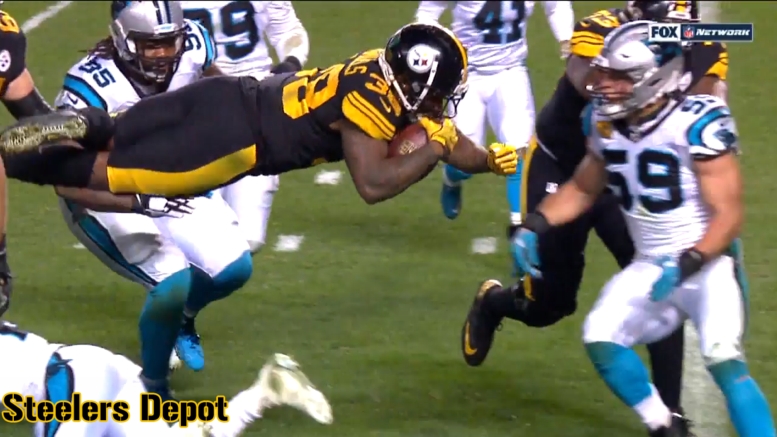 Question: Will the Steelers give James Conner more snaps off in favor of Jaylen Samuels and Stevan Ridley now that they seem sure Le’Veon Bell will not be joining them?

Over the course of the first six games of the season, second-year running back James Conner has compiled over 200 touches, including 164 carries and 39 receptions, averaging over 22 and a half touches per game and putting him on pace for about 360 touches for the season.

That is over 10 times the touches that he had a year ago. And this was a season going into which it wasn’t planned for him to be a starter. Le’Veon Bell was obviously supposed to be here. He’s not, it doesn’t sound like he will be, and almost everybody is fine with that, but it does leave some questions in its wake.

Do the Steelers want Conner to be touching the ball 22 times a game, for starters? For a player who does not have that history at the NFL level of shouldering such a load, and frankly learning from Bell’s wear and tear issues over the length of seasons, would they choose to be more cautious, when able, with their new starter in the second half of the season?

The team is in a good place now, with a 6-2-1 record on the strength of a five-game winning streak and within spitting distance of a bye week, which they control their own destiny toward if only they can manage to beat the New England Patriots this year (or lose to them and have the Patriots lose two other games), outside of their control).

Had they known that Bell would be coming in, the workload wouldn’t matter nearly as much. Now, if something happens to Conner, they know that they only have Stevan Ridley and Jaylen Samuels. I don’t think they want to have another Ben Tate or Fitzgerald Toussaint postseason, so will they be proactive from here on out in giving him some protection and time off when game circumstances allow?