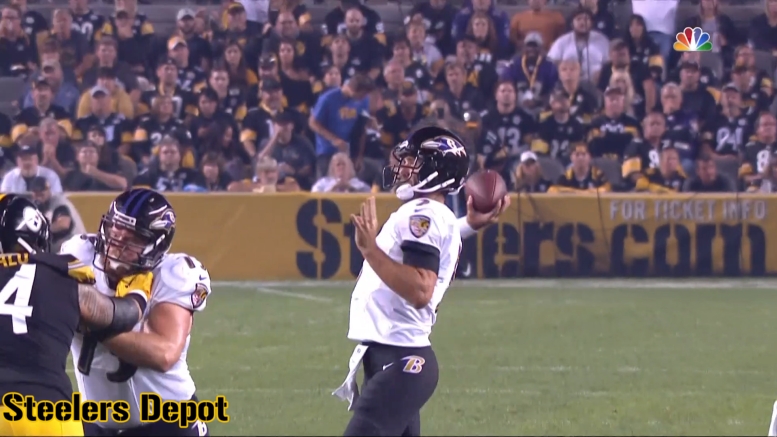 The Pittsburgh Steelers had plenty of problems on both sides of the ball last night against the Baltimore Ravens. One problem that they have never really had before, however, was Joe Flacco throwing the ball all over them.

During Sunday Night Football, Flacco completed 28 of 42 pass attempts for 363 yards and two touchdowns. That is 60 yards more than the next-highest yardage total he has ever put up against the Steelers. He has had two other 300-yard games before, hitting exactly 300 yards once in 2011, and a previous high of 303 in 2014.

Considering that Flacco was averaging 6.9 yards per pass attempt on the season coming into this game—and 6.8 yards for his career—it’s pretty damning for the defense to be this porous, especially given the high volume of pass attempts.

And, in reality, he only hit on three explosive plays for the game, two to John Brown. One went for a 33-yard touchdown in which coverage was blown, two defenders unsure of who was supposed to carry him down the field. The other was a 71-yard gain on which—once again—defenders just looked lost. Maxx Williams also had a 22-yard reception.

To have just three explosive plays on 42 attempts and still average nearly 8.5 yards per attempt is significant, and indicates that he had very few negative plays. He did connect on two thirds of his pass attempts, which goes a long way toward accomplishing that. And some of those incompletions were drops.

The point is, this defense made a Flacco offense in which he is surrounded by unfamiliar personnel click like it hasn’t prior to last night’s game. Willie Snead was noteworthy in having six receptions for 56 yards, several of them critical chain-movers. He beat Joe Haden twice at the sticks.

Something has got to give, but realistically, it probably won’t. Perhaps the return of Mike Hilton and Morgan Burnett could help patch up some holes, but it’s hard to imagine it getting a lot better from here. So much for Carnell Lake being the problem.