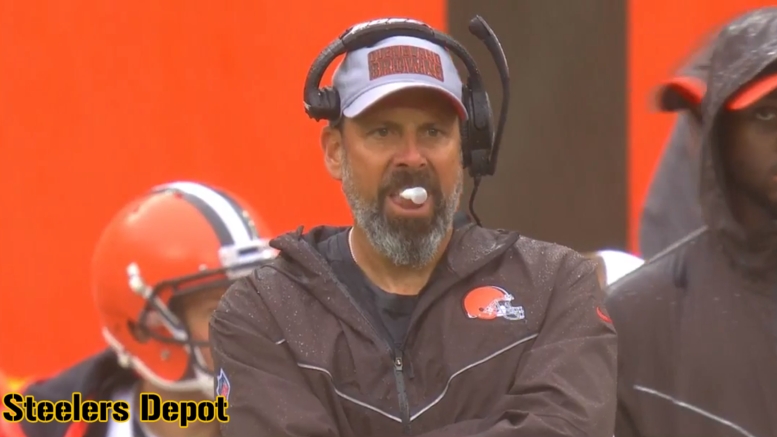 While the Cleveland Browns ultimately lost on Sunday in overtime thanks to a fumble on a punt return that led to the Tampa Bay Buccaneers kicking the game-winning field goal, it was the offense that Head Coach Hue Jackson lamented post-game.

Jackson, who attracted head-coaching attention due to successful stint as the offensive coordinator of the Cincinnati Bengals, strongly hinted that he would like to take that role back in his third season with the Browns. He was Cleveland’s play-caller for the past two seasons before he—so he claims, unmandated—brought in Todd Haley to be the offensive coordinator.

“I have to” be more involved in the offense, he said after the game. It’s what I know”, he continued; “I need to be a little more involved”. Yet he walked back the tone of his remarks yesterday, denying any assumption that he was looking to strip Haley of responsibilities.

“I think sometimes the way maybe it came off – and I take responsibility for that – was not in harshness of (the) staff”, he said yesterday. “It was in harshness of ‘God, I want to win.’ I want to do whatever I think it is going to take to help our football team win. That is where my motivation was coming from”.

The Browns are currently averaging 21.6 points per game, which ranks just 23rd in the league. That is certainly not great. But they averaged 16.5 points per game in 2016, and a pathetic 14.6 last year when they went 0-16, so the performance of the offense this season is an improvement upon past years.

And that is while dealing with as many moving parts as the offense ever has, including two new offensive linemen—replacing the greatest that has ever played for the team—two new running backs—one of which was already traded—and two new top wide receivers—the two top incumbents having been traded.

It’s far from unreasonable to expect the offense to struggle while depending greatly on a rookie quarterback throwing to rookie wide receiver, handing off to a rookie running back, all the while being protected from his blindside by a rookie left tackle. Still, Jackson believes he has the magic touch.

“My whole thing there is if we can put it together – first half and second half – then maybe we will have a better chance of finishing some of these games and winning”, he said. “I want to take a really good look at it, be very thorough through it, watch it all and see where I can help – infuse myself, I do plan on doing that, infuse myself to help and assist our offensive coaching staff”.

The first team that will get to see this in-Hue-sion will be the Pittsburgh Steelers, from whence Haley came (sorry, I just watched Julius Caesar). Pittsburgh experienced four of its top six scoring seasons in franchise history under his tenure.