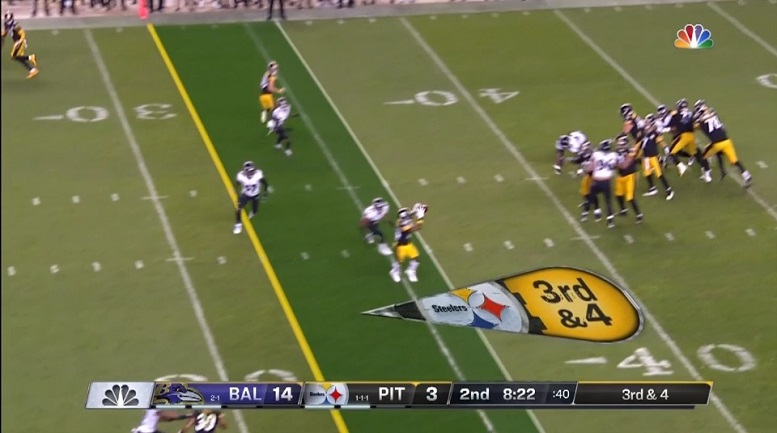 Outside of a 15-minute window during the second quarter, the Pittsburgh Steelers offense looked lifeless Sunday night against the Baltimore Ravens. The Steelers managed just 47 yards of offense after the second quarter and for the second week in a row failed to score any points in the second half. In simple terms, the offense has just not looked efficient.

Lately, I have been reading Caponomics, a novel by Zack Moore that touches upon the NFL salary cap and briefly touches upon offensive efficiency, specifically how the New England Patriots have thrived on offensive efficiency without splurging big money on big players. One passage from the book made me rethink not just how efficient the Steelers offense is, but whether it can operate to be efficient this season.

“Coaches like Bill Belichick break down larger objectives like production in the passing game into the basic principles of moving the chains efficiently through a high-percentage passing system…Belichick’s been able to avoid the obvious physical freak at wide receiver, but by instead focusing on players who move the chains.”

So far, the Steelers have followed the recipe. Ben Roethlisberger has been begging for a tall-freakish receiver for his entire career but the Steelers have trusted in their own philosophy, finding chain movers like Hines Ward, Antonio Brown, Emmanuel Sanders, JuJu Smith-Schuster and now James Washington. Even their athletic receivers such as Martavis Bryant have not been physical freaks like his height might suggest. The Steelers have followed the notion of avoiding the physical freak for an undervalued but effective chain mover, saving money and creating efficiency.

But here is where they are falling short.

“The chain movers end up being the Wes Welker, Julian Edelman and Danny Amendola types- guys who provide the team with between about seven and nine yards per target and a catch rate around 70% or better. Say a player catches 70% of the passes thrown his way, and he averages eight yards per target, that means the offense moves 80 yards for every 10 balls thrown even if he only caught seven of them.”

That is where the Steelers are falling short this season: creating efficiency from their playmakers. Players are not averaging seven to nine yards per target and if they are, the catch rate is not where it should be due to a plethora of issues surrounding play calling and Roethlisberger’s accuracy issues. 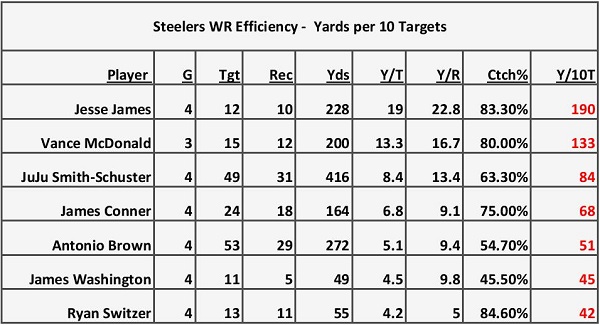 As the data shows, tight ends Jesse James and Vance McDonald have been highly efficient this season but the duo still only have 27 targets between them. The tight ends are some of the only Steelers to have success moving the chains, although this number is skewed by a small sample size.

Looking strictly at receivers though, Smith-Schuster is the only Steelers receiver who matches the criteria of matching 80 yards for every 10 balls thrown his way, though his catch percentage still falls under 70-percent. Brown has struggled the most, going from an efficient chain mover to a non-factor, averaging just five yards per target and a catch rate just above 50/50. For every 10 balls thrown to Brown, the Steelers only move 50 yards, thereby stalling the offense but of course, many of these issues come from Roethlisberger’s inability to connect with Brown.

Ryan Switzer is another chain mover who has seen quite a bit of plays schemed to him. While he continues to be a significant portion of the offense, he is not been efficient at moving the ball or racking up yards after the catch at all. That is why he is only averaging four yards per target and figures to move the ball 40 yards on every 10 throws.

Consider that if Roethlisberger threw 10 passes each to Switzer and Brown, the Steelers would still fail to move the ball 100 yards.

According to the Caponomics’ formula for measuring efficiency and to the naked eye, the Steelers offense is lacking efficiency right now. The usual chain movers like Brown are not moving the chains and other figures like Switzer are not doing much at all. A large part of this failure falls on the shoulders of Roethlisberger and the hope is once Big Ben starts firing on all cylinders, the offense’s efficiency shall return.