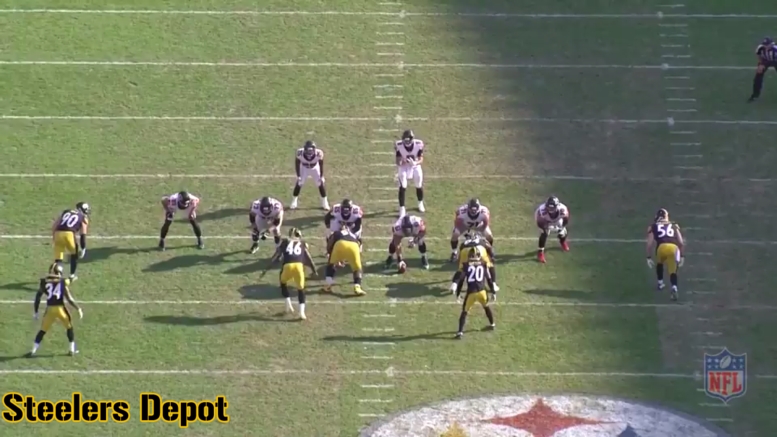 Guess who made his NFL defensive debut on Sunday for the Pittsburgh Steelers? Why, it was rookie college free agent inside linebacker Matthew Thomas, who was given the opportunity to play the final four defensive snaps of the game after the Atlanta Falcons got a first down at the two-minute warning.

Many fans have been clamoring for him to get on the field as the Steelers struggle to find an adequate starting pair at inside linebacker. The team even teased it when they gave him some sub-package snaps in the third preseason game with the starting defense in a package they called the ‘Seminole’, as he is from Florida State.

Don’t get your hopes up to see him much more though, however. He likely only got on the field right now because of injuries and a blowout. He ultimately played four snaps, generally rushing the passer, in garbage time. Perhaps after the bye week they will try to work him into a package, but for now, just enjoy your first glimpse of Thomas in a meaningful game on defense.

Thomas was the lone inside linebacker on these snaps. On first and 10, he blitzed (spoiler, he blitzed on three of his four snaps), where he was met by the running back on a quick pass by Matt Schaub that went wide of his target for an incompletion in the right flat.

If you didn’t realize he was going to be blitzing in this second clip, then you only have yourself to blame, as I pretty much warned you. Only he was a free rusher this time, the back leaking out to catch the pass, which went for five yards as Thomas was in the quarterback’s face.

Blitzing for the third consecutive time, now on third and five, he came from five yards back on a slight delay, where he was met by the back. Schaub’s pass was batted back into his face by Tyson Alualu, catching it himself for a seven-yard loss.

Finally on fourth and 12, he dropped into coverage in a left-center zone, breaking well once Schaub threw the pass to put the receiver down following an eight-yard gain.

It wasn’t an eventful debut, to be sure, and it hardly could have been at the tail end of a 24-point win, but he did notch his first defensive tackle of his career. Will he have an opportunity to get another one later this season?