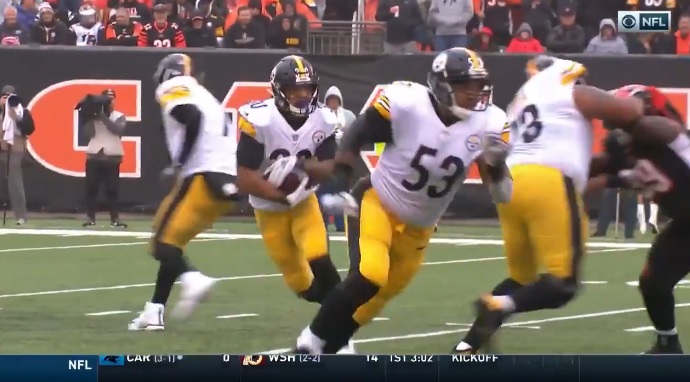 Entering Monday night, Pittsburgh Steelers second-year running back James Conner is sixth in the NFL in rushing yards with 453 and the added context to that is that he was off this weekend due to the team being on their bye. Perhaps the most impressive thing about Conner’s ability to average 4.4 yards per carry on his 103 total carries so far this season is the fact that quite often he’s having to carry the football against stacked defensive fronts.

According to NFL’s Next Gen Stats, 38.83% Conner’s 103 total rushing attempts have come against defensive fronts that have included eight or more players in the proverbial box. Only two other running backs, Royce Freeman of the Denver Broncos and Alex Collins of the Baltimore Ravens, currently have a higher percentage of rushes against such loaded fronts through the first seven weeks of the 2018 regular season. Conner, by the way, still has 16 more total carries than Collins does and 32 more than Freeman.

Another unique aspect centering around Conner’s success as a runner so far this season is the fact that he’s already registered 9 runs of 15 yards or longer and that’s second to only Ezekiel Elliott of the Dallas Cowboys entering Monday night. At least 5 of those 9 runs came against defensive fronts that were heavily stacking, according to my research.

As you would probably imagine when it comes to Conner, he’s very much a north and south runner as evidenced by the 3.74 efficiency stat that Next Gen Stats currently has for him. Additionally, Conner is probably a bit more of a patient runner than normally given credit for as evidenced by his 2.94-second per carry average time behind the line of scrimmage.

As a means of comparison, however, last season Steelers running back Le’Veon Bell posted a 3.11-second per carry average time behind the line of scrimmage, according to Next Gen Stats. So, while Conner might indeed be a bit more patient than initially given credit for, he’s far from being as patient as a runner as Bell has been in past seasons.