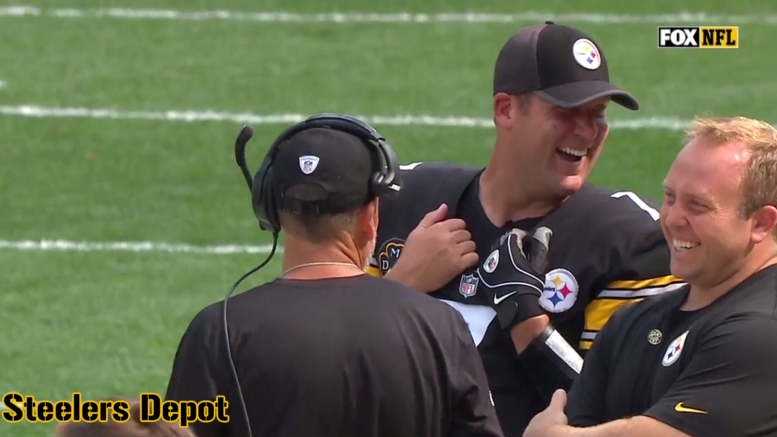 There is probably nobody in the NFL who has had a more intimate relationship from a player-coach perspective with Todd Haley than Pittsburgh Steelers quarterback Ben Roethlisberger. Haley served as offensive coordinator in Pittsburgh for the past six seasons, which is the longest he has ever held one position in his decades-long coaching career.

In spite of the fact that the offense was very productive during his tenure, posting four of the top six scoring seasons in team history, the Steelers chose to allow his contract to expire and promoted quarterbacks coach Randy Fichtner to the role of offensive coordinator, with Haley soon joining the Cleveland Browns.

But Cleveland just dismissed both him and Head Coach Hue Jackson yesterday, the former having only been with the organization for eight games. Roethlisberger was asked for his reaction to the firing earlier today on his radio show.

Calling it “crazy”, the quarterback said that he “got the news on Monday that Coach Hue was getting fired, and then Todd shortly after that, so, kind of crazy. Even the team seemed to learn all this information in a trickle-down effect.

“It’s hard. I was kind of surprised”, Roethlisberger went on. “I don’t think you typically do both, a head coach and a coordinator, you wouldn’t think that at least. I thought that maybe Todd would have gotten the [interim head coach] job, but I guess they wanted to go with the defensive coordinator”.

That would be Gregg Williams, in his second season as the team’s defensive coordinator. He will hold a dual role until further notice. The long-time coach has previously been indefinitely suspended after a bounty system was uncovered while he was with the New Orleans Saints that went a little beyond putting your testicles in the C Gap.

As you can imagine, with Haley being dismissed after just half a season following six years with the Steelers and working with Roethlisberger, the quarterback was naturally asked to comment (once again) about his relationship and understanding of how the coach works.

“He’s a very passionate coach. He’s passionate a lot. He wants to win, he wants to get the best out of his players”, Roethlisberger said, adding. I think there’s nothing wrong with that. I think that’s what you need”.

He likened Haley to wide receiver Antonio Brown, whom Roethlisberger has defended on a number of occasions following sideline incidents of frustration.

Fichtner seems to be the polar opposite, but the team is still producing at an all-time best pace, averaging 29.1 points per game and on pace to score 466 points by the end of the season.