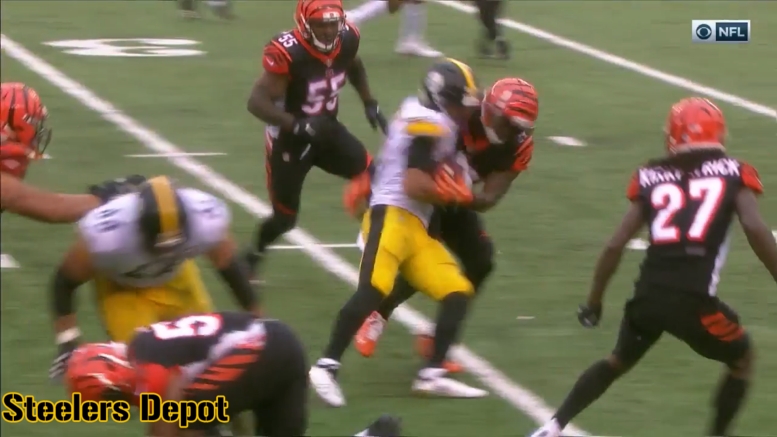 The Cincinnati Bengals may have lost at home to the Pittsburgh Steelers, but they still sit atop the division even with the Baltimore Ravens sitting across from them with a 4-2 record by virtue of their head-to-head victory from earlier in the season.

While it’s good to be at the top of the standings, Cincinnati also took a physical beating on the field, with the Steelers’ offense surprisingly inflicting a number of clean casualties against the Bengals’ defense. Several starters left the game with a variety of injuries, some of whom were unable to return.

Among the wounded who did not get back into the game was Nick Vigil, a starting linebacker who left in the first half due to a knee injury. He was ultimately ruled out for the remainder of the game, replaced by veteran reserve Vincent Rey. Vontaze Burfict also left the field multiple times after suffering a shoulder injury.

Nickelback Darqueze Dennard also suffered a shoulder injury while defending a deep pass against JuJu Smith-Schuster, which the wide receiver literally caught around his head. He was unable to return, which left the Bengals’ secondary thin. Both starters, William Jackson III and Dre Kirkpatrick, also visited the sidelines, but both returned.

Veteran safety Shawn Williams was the third Bengals starter to leave and not return, suffering a concussion while attempting to make a tackle against running back James Conner. That injury occurred about two thirds of the way through the game on a 16-yard carry.

Carlos Dunlap is yet another player who left the game for the Bengals, though he also was able to return. By the end of the evening, everyone from Malik Jefferson and Josh Tupuo to Hardy Nickerson, Clayton Fejedelem, and Darius Phillips ended up taking snaps for their wounded group.

Which, as a team, surrendered 481 total yards of offense to the Steelers, including 369 passing yards from Ben Roethlisberger, who completed about 70 percent of his 46 pass attempts, and 112 rushing yards, almost all of which came from James Conner on 19 attempts.

Aside from allowing the Steelers to score 28 points, the offense also produced an average of 7.2 yards per play, a stunning efficiency, especially when you contrast it to the just 4.7 yards that the Bengals’ offense was able to manage.

Some of those defensive injuries surely played into Pittsburgh being able to have a very successful day against the Bengals’ defense, even if they stalled twice in the red zone and had to settle for field goals—even from the one-yard line.