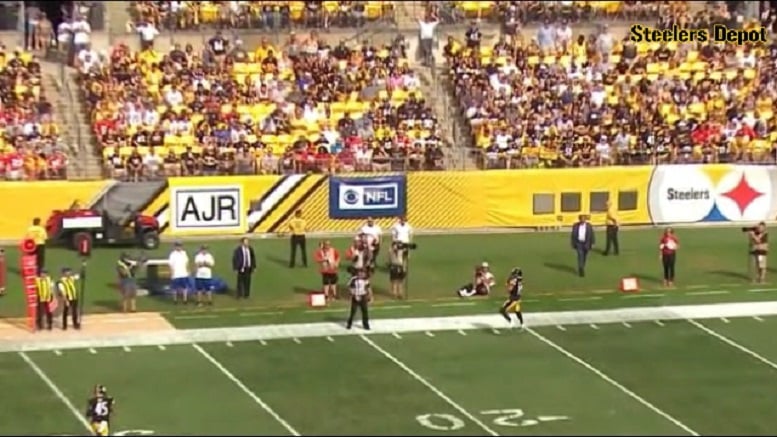 The Pittsburgh Steelers certainly had issues in all three phases of the game in Sunday’s loss to the Kansas City Chiefs. While it certainly wasn’t the main reason why the Steelers lost to the Chiefs, what transpired immediately after the Pittsburgh defense tackled Kansas City running back Kareem Hunt certainly didn’t help matters.

After the safety, the Chiefs had to perform a free kick from their own 20-yard-line and it’s obvious the Steelers receiving team wasn’t sure how to line up. This confusion resulted in Steelers running back Stevan Ridley being penalized 5 yards for an illegal formation and that wiped out a 20-yard return by wide receiver Antonio Brown to the Pittsburgh 47-yard-line.

Prior to Chiefs punter Dustin Colquitt kicking the football, you can see Steelers outside linebacker Anthony Chickillo was presumably attempting to get Ridley to come up the field and inside the legal restraining line area but unfortunately the running back didn’t get there before the football was kicked. You can see all of this transpire in the gif below that includes Steelers special teams coordinator Danny Smith in the bottom right-hand corner of the frame.

If that penalty wasn’t bad enough, what happened on the re-kick is something else I hope Smith and head coach Mike Tomlin are asked about this coming week when each meet with the media next.

NFL rules state that a free kick, just like a kickoff, can’t go out of bounds untouched without it resulting in a penalty. Colquitt’s re-kick was a booming punt to the left sideline from the Chiefs 25-yard-line and Steelers wide receiver Ryan Switzer fielded it right at the Steelers 15-yard-line but also right near the sideline. He then returned it 15 yards. Had Switzer not fielded that free kick, would it have gone out of bounds? It’s hard to say for sure via the television angle, but it sure looks like that would’ve been the case. I mean, as you can see in the gif below, he had to really watch his footing along the sideline to make sure he didn’t’ step out of bounds after catching the football.

According to the NFL rules on free kicks, which I’m also including below, the penalty for a safety kick out of bounds is that the receiving team may elect to take possession of the ball
30 yards from the spot of the kick or at the out-of-bounds spot. In this particular case on Sunday, 30 yards from the spot of the kick would’ve been the Steelers 45-yard-line, or 15 yards further up the field than Switzer’s return.

Obviously, we don’t know if that would’ve made a difference in what transpired offensively from that point forward. Sure, the Steelers offense stalled on that ensuing possession but that’s not the point and the reason for this post. Instead, the Steelers blew two back-to-back opportunities to start that offensive possession right around midfield because of at least one, and maybe even two, big special team blunders by Smith.
9_Rule6_Free_Kicks