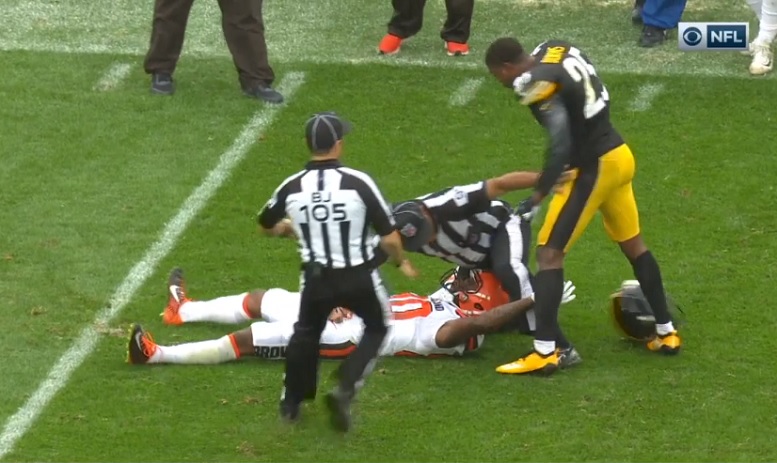 One Pittsburgh Steelers players incurred a fine this week for his actions in the team’s Week 1 game against the Cleveland Browns.

According to Ray Fittipaldo of the Pittsburgh Post-Gazette, Steelers cornerback Artie Burns was fined $13,369 this week for his unsportsmanlike conduct penalty against the Browns. Burns incurred the penalty after removing his helmet after a confrontation with Browns wide receiver Jarvis Landry away from a play.

Artie Burns fined $13,369 for his unsportsmanlike conduct penalty against the Browns. (He threw his helmet after a confrontation with Jarvis Landry). T.J. Watt not fined for his unnecessary roughness penalty on Tyrod Taylor.

The play in question happened with 13:50 left in the third quarter and after Browns running back Carlos Hyde was tackled for a gain of 3 yards by Steelers defensive tackle Javon Hargrave. Burns was blocked aggressively on that play by Landry and took exception to it. He removed his helmet after wrestling some with Landry on the ground and then proceeded to have a few words with Browns offensive coordinator Todd Haley, formerly of the Steelers.

Last season, Burns was also fined for removing his helmet after being flagged for pass interference on Baltimore Ravens wide receiver Mike Wallace midway through the fourth quarter of the Steelers Week 14 game.

Burns, by the way, was added to the Steelers Friday injury report as questionable with a toe injury after being limited in practice earlier in the day.

As Fittipaldo also reported on Friday, Steelers outside linebacker T.J. Watt was not fined this week for his unnecessary roughness penalty Sunday on Browns quarterback Tyrod Taylor. Watt was initially credited with the first quarter sack on that play but this past week a scoring change was made and the full credit was instead given to Hargrave.