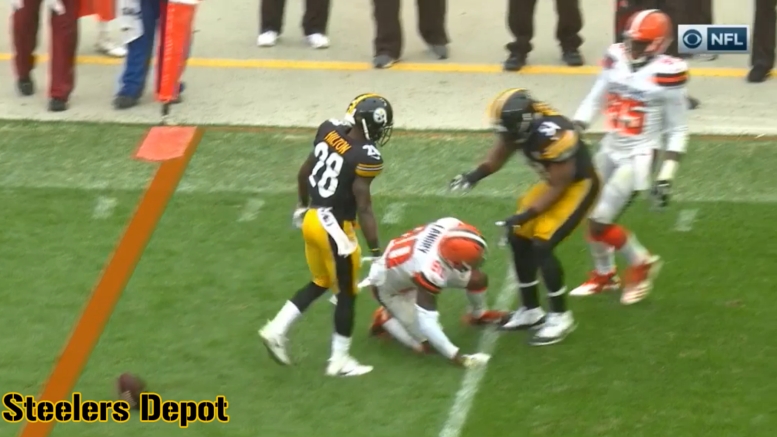 There has been a lot of talk about Mike Hilton of the Pittsburgh Steelers this offseason after he emerged as their slot cornerback a year ago, relatively out of nowhere. He certainly was not scheduled to be in that role, or even to make the roster, at the start of the offseason, but a year later he is being talked about as being perhaps their best individual cornerback on the team.

While all three of their starting cornerbacks played well in the game, I might have to agree based on the week one tape, as outside of one play, he had very good coverage virtually all day, frequently working against the $15-million-a-year Jarvis Landry.

That included a big play on the Cleveland Browns’ opening drive. On third and six, just across midfield, Tyrod Taylor looked for his receiver out of the slot, who tried to catch Hilton opening his hips, but the second-year defender adjusted and was able to get his hand in front of the pass to break it up, forcing a punt.

There was one mishap later in the quarter on a third and seven, deep in the Browns’ own territory. As best as I can tell, there was confusion about coverage assignments, and as Hilton moved to cover Landry, looking as though he was running an out route, he turned upfield instead, left wide open for a big 39-yard gain.

The conversation about Hilton is always going to include his size, and he is always going to do his best to answer the questions about him. While the team looks at him as a slot defender, they are willing to put him on tight ends, because they know he can bring them down. As he did on this second-quarter play against David Njoku.

Into the fourth quarter, Taylor once again looked Landry’s way, this time on third and 15. This time actually running an out route, Landry started to curl back toward the first-down marker to run away from Hilton, but the relentless cornerback raced back into the play and, as the broadcast view most clearly shows, once again gets a hand on the ball to break up the pass.

Landry did get him once on that double move, but Hilton controlled the fifth-year Pro Bowler throughout the rest of the game. This breakup in the middle of the fourth quarter on third and long forced the Browns to punt just outside of field goal range.

Landry did get one more reception on Hilton at the end of the fourth quarter, but as the play shows, the cornerback is aggressive to the ball, and here did a great job of getting the receiver on the ground and limiting yards after contact.

When we talk about Hilton, a lot of the time it’s about his run stops or pressure as a blitzer. So it’s almost a change of pace to offer a more extended look at his work in coverage, because, frankly, he does that well, too. And he wouldn’t be on the field if he didn’t.