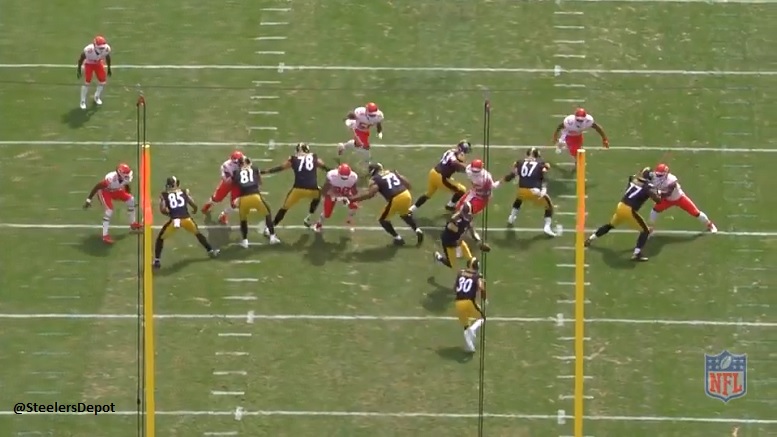 After a few days where all the discussion surrounding the Pittsburgh Steelers diverted to a few off-field issues, it is now time to return to the field and diverge into the football issues at hand. The team is coming off a brutal 42-37 loss to the Kansas City Chiefs and while a lot of the blame, rightfully so, is being put on the defense, the situation needs some context. The offense did the defense no favors, coming out flat in the first quarter, and the usually consistent offensive line deserves its fair share of blame for the dreadful start.

With what is usually a solidified and consistent unit, the Steelers’ offensive line struggled both individually and as a unit during the first quarter of Sunday’s affair.

The Steelers get the ball first and are facing third and long with guard Ramon Foster taking on Chiefs defensive end Chris Jones. The Chiefs defensive end has his way with Foster, fooling the veteran guard with a move to the inside before cutting back across Foster’s outside shoulder, giving him a clear target on Ben Roethlisberger. Roethlisberger somehow avoids Jones but is rattled and simply throws the ball away, forcing the Steelers to punt.

Two plays later and the Chiefs are up 7-0.

It is hard to figure out where to start when the play in question is just a complete and utter failure. Foster is beat off the line once again but why the play ultimately fails comes from the other side of the line. Neither Maurkice Pouncey or B.J. Finney pick up Jones, instead both opting for second level blocks on linebacker Anthony Hitchens.

Finney and Pouncey both turn to each other after the play is over, realizing their error and seem to discuss each other’s responsibilities on the play. Though as you will see later, their conversation did not resolve any issues.

Two plays later and the Steelers find themselves in third and long again. And just like the first time around, the result is eerily similar. The Chiefs come with just a three man pass rush with their defensive ends lined up extremely wide. Pass rusher Dee Ford is lined up with Alejandro Villanueva, though not for long. Ford’s wide pass rush is enough to knock Villanueva off balance, leaving him with Foster. A quick spin move leaves Ford with a shot on Roethlisberger but the quarterback has already thrown the ball away.

The Steelers punt and five plays later the Chiefs get into the endzone again. It is now 14-0.

The offensive line really struggled with their assignments and reaching their second level blocks early Sunday. Here it happens again with the same suspects, Pouncey and Finney. A handoff to speedster Ryan Switzer loses yardage because of another miscommunication between Pouncey and Finney.

Both Pouncey and Finney opt for the second level rather than blocking defensive tackle Derrick Nnadi. Pouncey then completely ignores Anthony Hitchens, who is just waiting to make a play on the ball carrier. Hitchens closes down on Switzer for a loss and a play that could have gave the Steelers positive yardage puts them back into a hole.

Two plays later, the game looks to be as good as over as Roethlisberger is sacked and stripped with the Chiefs returning it for a touchdown, but a defensive holding call nulls what would have been a 28-0 Chiefs lead.

Just like the rest of the team, the offensive line has provided a mixed bag of results through the first two weeks. Villanueva has been great at times but struggled in key situations. Foster has looked a step behind since returning from his knee injury. Pouncey has had several low snaps and not played at the all pro level he has been accustomed to playing at.

The unit rebounded as the game progressed but their disastrous start played as much into the team’s 21-0 deficit as any other unit of the team.