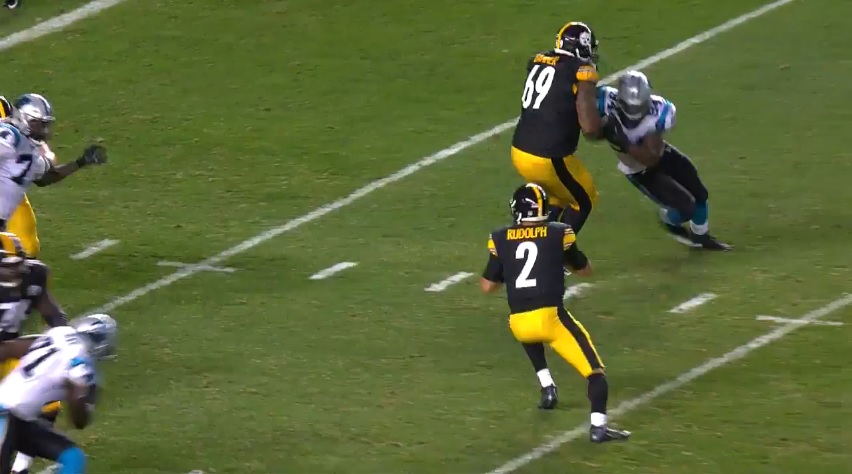 The final preseason game is thankfully in the books, as the Pittsburgh Steelers rolled to a 39-24 win Thursday night at Heinz Field over the visiting Carolina Panthers.

Pittsburgh received some outstanding performances from Joshua Dobbs and Mason Rudolph at quarterback, as well as Tevin Jones and Justin Hunter at receiver to put up a great offensive showing.

Defensively, undrafted rookies Ola Adeniyi and Matthew Thomas all but solidified roster spots with outstanding performances in the final game, capping off strong camps and preseason showings throughout the month of August.

How did others do on Thursday night? Let’s take a look at positional grades.

I’m not sure how to sum up Dobbs and Rudolph’s performances on Thursday night other than using the word “spectacular” over and over again.

Dobbs started the game and looked the best he has in a Steeler uniform, making it very hard for the team to part ways with him. The second-year quarterback finished 8-for-12 for 151 yards and a touchdown, adding three rushes for 18 yards and a thrilling leap into the end zone over two defenders to cap off the Steelers’ first drive of the game.

As the starter, Dobbs led the Steelers on two scoring drives, showed great poise in the pocket, and always kept his eyes downfield when avoiding the rush.

As for Rudolph, the rookie came out slinging the ball, which has been a problem for him this preseason at times. Rudolph threw a dart between three defenders for a score to Jones, capping off a strong two-minute drive, and showed some fire in the first half, getting in the face of a Carolina linebacker after a late hit in the end zone.

Overall, the two young quarterbacks looked darn good. It’ll be interesting to see what the Steelers decide to do when it comes to keeping three or four quarterbacks.

There’s not a ton to write home about here with this group, aside from Stevan Ridley dominating in limited action.

Ridley looked young again and showed good footwork and burst, ripping off a couple of good runs, finishing with 39 yards on eight carries. Ridley had a jump cut to his left to avoid a free defender in the backfield, and got up the field in a hurry on a power, showing he can once again be a capable No. 3 behind Le’Veon Bell and James Conner.

Jaylen Samuels took a step back in the final preseason game, carrying the ball twice for zero yards, and didn’t catch a pass in this one. Maybe that’s a sign he was a roster lock and the Steelers got him off the field early. Maybe not. We’ll see.

Fitzgerald Toussaint didn’t do much with his three carries, gaining just seven yards. He stood out in pass protection though, coming across the formation from right to left to allow Rudolph to fire a strike down the field to Jones.

It was nice to see Jarvion Franklin get some work, especially in short-yardage situations. The undrafted rookie out of Western Michigan bowled through a defender at the goal line for a 1-yard touchdown, but he finished with just 10 yards on eight carries with a long of seven.

Heck of a night for guys like Jones, Justin Hunter and Quadree Henderson.

There’s no chance Jones makes the 53-man roster, but he finished with 90 yards on three catches, hauling in two touchdowns. Jones should have had a third touchdown but dropped a throw from Dobbs in the second quarter. The young receiver showed some play-making abilities with the ball in his hands too, adding a nice 39-yard catch-and-run in the second half down the left sideline, evading a number of tacklers in the process.

Henderson finally got some chances and converted on them. The Pitt product caught both targets on the night, including an impressive one-handed grab in the end zone on a scramble drill from Rudolph, extending the Steelers’ lead to 32-10.

Damoun Patterson had a big drop in the end zone that would have turned out to be an outstanding combative catch. Alas, the ball squirted out.

Hunter likely played his way onto the roster for good Thursday night, hauling in three passes for 72 yards, including a nice catch over top of two defenders up the seam on a strike from Dobbs. He’s a maddening talent, but he flashes just enough to warrant a roster spot.

Bucky Hodges, welcome to the party.

The Virginia Tech product had a strong night in his final chance to impress the organization. The move tight end hauled in two receptions for 43 yards, including a nice 36-yard gainer down the left sideline that saw him slip behind two defensive backs.

Hodges also impressed with his motor on Jones’ 39-yard catch-and-run, flying down the left sideline to get in front of Jones, bowling two defenders out of the way.

Pharoah McKever had a night to forget, dropping a touchdown on a read-option from Rudolph. The ball hit McKever right in the chest. It may have been slightly tipped in the window Rudolph tried to fit it into, but it’s a play a guy trying to crack the roster must make.

BJ Finney had a couple of wide snaps in shotgun tonight with Dobbs back there, but overall the veteran stalwart of this group had a strong performance once again. The best thing about his performance was that he came out healthy.

Same for Matt Feiler, who got his final tune-up in and came away injury free. That’s always positive news.

Guys like Chukwuma Okorafor and Zach Banner looked solid at times, and like projects in others. Okorafor was called for a hold on Rudolph’s scramble in the red zone, while Banner seemed to get mixed up on Rudolph’s sack with the guard next to him, allowing a free runner at Rudolph inside.

Jake Rodgers had a quiet night, likely spelling the end for him in Pittsburgh. Again, it’s incredibly hard to watch the offensive linemen on TV broadcasts. If I were to revisit this over the weekend, the grade could fluctuate.

Rushing for just 3.0 yards per carry isn’t something to be happy with, either, as are the five quarterback hits allowed in this one.

Overall, I thought Lavon Hooks was the best defensive lineman on the field Thursday night for the Steelers. I think he’s played his way into the conversation for the No. 6 DL, and really pushed LT Walton this summer.

Hooks had two tackles, one sack, and two quarterback hits in the win. He’s athletic and versatile enough to line up all across the line of scrimmage.

Casey Sayles had a nice run stop, stacking and shedding the engaged lineman, while Joshua Frazier looked like a brick house at times in the middle.

What I didn’t like from this group at times was how far up the field they got while engaged with blockers, allowing for huge cutback lanes for Carolina backs. They’re all backups, but it’s something I’m sure Karl Dunbar will be talking about in film review of this one.

Thomas is a lock for the 53-man roster. The debate is now about how much he’ll play with the first-team defense, and how big of an impact he’ll make.

Aside from his unbelievable strip sack and fumble return to the 1-yard line, Thomas was all over the field like a bat out of hell, recording 11 tackles. The Steelers unearthed a gem.

Along with Thomas, I thought Tyler Matakevich and Jon Bostic looked solid throughout the game. Matakevich recorded six tackles, while Bostic added three tackles and a tackle for loss. All three will probably split snaps this season, unless Thomas just takes over down the stretch full time.

Backups LJ Fort and Matt Galambos recorded tackles in the win, with Fort being the only one in this sentence making the team.

Outside, Adeniyi once again was outstanding, recording a strip sack one play after being called for encroachment. That’s one way to make up for a mistake. Adeniyi has shown more pass-rushing prowess than Anthony Chickillo or Bud Dupree has in one preseason stretch. There’s no way he doesn’t make the roster. He has to be active on game days.

Chickillo played well in the first half against the run, recording four stops, but once again he’s an issue in space.

Keion Adams is a guy who probably sealed up a roster spot Thursday night as well, recording five stops, as well as recovering Adeniyi’s forced fumble for the second time this preseason.

As far as regular season contributors go, the Panthers really picked on Cam Sutton Thursday night. The second-year corner had a rough go of things after making an early play down the right sideline, breaking up a pass.

Carolina went right at Sutton from the outset, challenging him with a variety of routes, capping off the night with a back-shoulder touchdown from Taylor Heinicke to Mose Frazier that completely fooled Sutton.

Granted, this was all done with Sutton playing the boundary role, rather than in the slot, but I did come away a bit concerned with Sutton’s performance against guys unlikely to make the Panthers’ 53.

One guy who did have a good night was Brian Allen, who really bounced back from a rough game two weeks ago at Green Bay by playing some terrific football in the final two weeks.

Allen was a sure tackler Thursday night, and used his length on a deep ball and an out route to break up throws. He has to tap into that natural length he has to unlock his vast potential as a corner. Thursday night was a good jumping-off point.

Jordan Dangerfield and Marcus Allen were heat-seeking missiles Thursday night from the safety position, flying up to make stops against the run. Unfortunately, Allen had some friendly fire on Malik Golden, taking out his knee in gruesome fashion.

You never want to see that in a preseason game and you feel awful for Golden.

Allen and Dangerfield did combine for 15 stops (10 solo) on the night, so it will be interesting to see what the Steelers do with that final safety spot.

Jamar Summers played well in the second half for the Steelers at corner, jumping a route and nearly coming up with an interception on Kyle Allen. Summers played the run well, too. I did see at least one missed tackle, but it was a nice close to the preseason for the UConn product.

Ryan Switzer looked explosive in limited action as a punt and kick returner Thursday night, averaging 21.5 yards per return on kicks, and gaining nine yards on a punt return that looked better than the yards gained in the end.

He’s a shifty returner and brings a change of pace to that area of the game.

Henderson took one kick back 29 yards, capping off a strong night overall for the Pitt product. It just won’t be enough to make the 53-man though.

In the kicking game, Chris Boswell hit a 21-yard field goal and connected on all four extra point attempts to the surprise of nobody.

Jordan Berry punted just once – a 36-yard boot – but he did a nice job of getting hang time finally, allowing the punt coverage unit to get down the field.

Matt Wile got a lot of work for the second straight week, punting three times, averaging 50.0 yards per punt, including a long of 54 yards. Keep an eye on that position Friday to see what the Steelers decide to do.