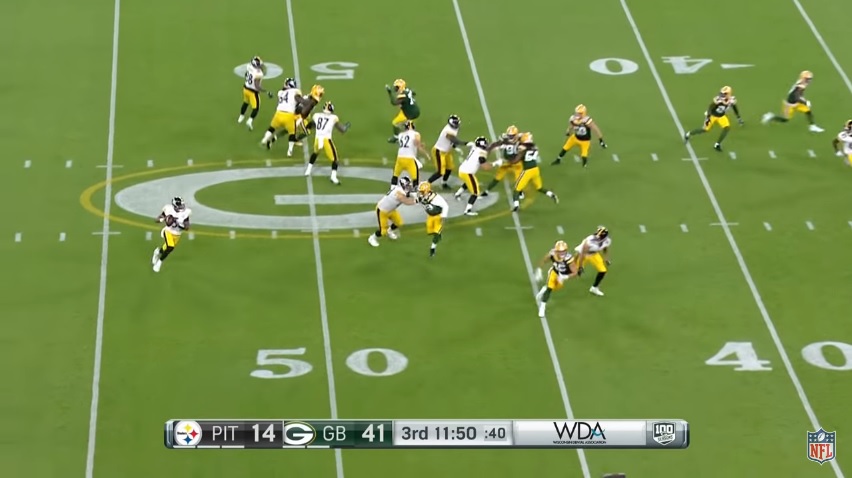 I’m glad that one’s over with.

Coming off of a win in Week 1 of the preseason, the Pittsburgh Steelers came out and laid an egg Thursday night in Green Bay, falling to the Packers 51-34 in one of the sloppiest preseason games I’ve watched. That’s saying something for a preseason game.

Disaster struck early and often for the two young quarterbacks, and the defense continues to be a turnstile. Again, it’s important to remember that it’s the preseason, but it’s hard to come away from this game feeling positive.

Let’s take a look at how each position did.

Josh Dobbs finished with some solid numbers in the second half, but rookie receiver James Washington bailed him out on both touchdowns, causing Dobbs’ numbers to look much better than he actually played.

Aside from his two touchdown tosses, Dobbs threw a terrible pick-6 to start the second half. Fortunately, the second-year quarterback bounced back nicely, looking comfortable for the most part directing the Steelers’ offense.

The same can’t be said for Mason Rudolph after this game. The rookie looked woefully uncomfortable with the first-team offensive line and James Conner, throwing a pick-6 on the first play of the game, and never really settling in from there.

Once the first offensive line unit left the game, Rudolph’s protection broke down, he got happy feet in the pocket, held onto the ball way too long multiple times, and struggled with ball security again.

Rudolph did have a great throw to JuJu Smith-Schuster for the Steelers’ second score of the game, fitting the ball into a tight window in the back of the end zone, putting the ball where only JuJu could get it.

I have confidence the rookie will bounce back from a tough performance, and I refuse to come anywhere close to writing him off yet. But let’s remember Landry Jones was never losing the backup gig.

James Conner is really showing how talented he is as a running back.

Conner again looked like he was shot out of a cannon on all five carries Thursday night, ripping off runs of 24 and 26 yards on the Steelers’ third drive of the game, with the latter one going for an impressive touchdown.

Behind Conner, Fitzgerald Toussaint continues to pop off the screen, showing good wiggle and burst in his runs, while rookie Jaylen Samuels flashes in the second half.

Toussaint rolled up 26 yards on seven carries, while Samuels finished with 38 yards and a score on nine carries. Samuels also added 13 yards on three receptions on the night, showing off his versatility.

James Washington, have yourself a night!

The rookie was fantastic Thursday night, torching the Packers’ secondary for 114 yards and two touchdowns on five receptions, with both scores coming on ridiculous contested catches.

Washington also flashed his deep ball abilities on a 54-yard catch from Dobbs in the second half, causing trouble for the Packers all night long.

Damoun Patterson came on late for the Steelers, finishing with three receptions for 35 yards, adding in a great back-shoulder catch down the right sideline for a solid gain.

Aside from the two young guns, JuJu Smith-Schuster caught a touchdown for the second straight week, going up in traffic in the back of the end zone for a nice catch off of a feed from Rudolph.

Trey Griffey had a decent game for the Steelers, hauling in two passes for 23 yards on the night, while popping off the screen on special teams at times. He’s a dark horse candidate for the roster, but Thursday’s performance was a step in the right direction.

Justin Hunter added one catch for 19 yards on a contested rep, but was rather quiet from that point on.

Jesse James hauled in one pass for 21 yards on the night, breaking free across the middle to show Rudolph his numbers after a bobbled snap, while Bucky Hodges flashed at times as a blocker, which is a positive sign.

James also sealed off the edge defender on Conner’s touchdown run, creating a big lane for the second-year back to run through.

However, Pharoah McKever had a rough night, getting called for a holding penalty on a third-and-short play, negating a first down. McKever did haul in one pass for 10 yards, which came in the red zone, but the penalty really hurt.

The first unit looked really strong against the Packers, allowing the Steelers to move the ball at will on the ground early.

Alejandro Villanueva had a great down block on Conner’s touchdown run, collapsing the right side of the Packers’ defensive line, while Matt Feiler and BJ Finney had good blocks on Conner’s 24-yard run, getting to the second level to spring Conner.

The second unit had its struggles, as Reggie Gilbert, forcing Rudolph to get rid of the ball too soon on the 4th and 6 play, smoked Chukwuma Okorafor off the edge.

RJ Prince had a false start in the red zone, pushing the Steelers backwards in the second half, but Larson Graham and Jake Rodgers played well at times.

However, the second and third units allowed way too much pressure once the first unit came out of the game, putting Rudolph under siege a ton, causing the rookie to be very uncomfortable in the pocket.

Stephon Tuitt really looks like he’s just going through the motions out on the field. That’s a problem. He hasn’t looked dominant on a single snap. Plus, Tuitt missed a sack on Brett Hundley in the second quarter, allowing the veteran backup to scramble for a touchdown.

Daniel McCullers looked pretty solid at times starting over Javon Hargrave, collapsing the pocket early in the game to force Aaron Rodgers to scramble. The big nose tackle is slowing rounding into the player the Steelers expected him to be.

Hargrave and Casey Sayles played well sporadically, as both finished with three stops. Hargrave seemed to respond well to his demotion, playing with strength and explosion along the line.

This unit did a nice job holding the Packers to just 2.7 yards per carry, but there just wasn’t enough push in the passing game, allowing Packers quarterbacks to sit back comfortably and pick apart the Steelers’ secondary.

Sure, Dupree’s sack one mostly unimpeded, but I was rather impressed with his get-off on the play, beating the Packers’ left tackle off the edge with relative ease.

Outside of Dupree, I was really impressed with Vince Williams. He is a tremendous blitzer, and he showed that again Thursday night, applying a ton of pressure to Rodgers and Hundley in the first half, forcing both to flush out of the pocket.

Can we start talking about LJ Fort being a realistic starting option next to Williams? Fort once again played very well in the second half, finishing with five tackles and a sack. He’s constantly around the ball against the run, but did allow a 3rd and 14 conversion in the fourth quarter after losing the Green Bay tight end across the middle of the field.

I wasn’t very impressed with Tyler Matakevich or Jon Bostic on the night. Bostic was called for pass interference early in the game because he never turned around to find the ball in the air, running through the receiver. Mike Tomlin vehemently disagreed with the call, but turn around and find the football!

Both Bostic and Matakevich finished with three stops each, but neither is standing out in a positive way.

Rookie Matthew Thomas showed off his athleticism Thursday night, nearly chasing down Jake Kumerow on his 82-yard catch and run after showing blitz on the play. Thomas decent game, finishing with three run stops. He was more aggressive filling lanes Thursday night too, which was an improvement from Week 1.

Ola Adeniyi continues to cause problems for opposing teams, too. The rookie plays the run well, and seems to always get pressure on pass rushes. He’s putting together a strong preseason’s worth of film.

Keion Adams also had a solid second half for the Steelers, applying pressure off the edge. While he wasn’t credited with a full tackle Thursday night, he was consistently around the football.

Against the first unit, Davante Adams shook free on a simple slant route, getting away from Coty Sensabaugh and Morgan Burnett for a big gain, setting up Jimmy Graham’s touchdown over rookie Terrell Edmunds, who lost track of the All-Pro tight end on a broken play.

Artie Burns seemed to be in the trail technique all night long, and that didn’t bode well for him as receivers gained separation easily, making for easy targets across the middle of the field.

Burnett bounced back after Adams’ catch and run, finishing with four stops and a sack, coming downhill against the run with force, making a few stops behind the line of scrimmage for the Steelers.

Speaking of Edmunds, I thought he had an up-and-down night, not a brutal, or bust-inspiring night like some larger voices would have you believe.

Yes, he lost Graham on the touchdown, but he was tight in coverage the entire play. He just got turned around for a slight second and recovered quickly, but Rodgers’ release is too fast and Graham is too strong in the red zone.

He bounced back with a great forced fumble on Ty Montgomery on kickoff coverage, but then missed a tackle on Lance Kendricks in the open field later in the half, allowing the veteran tight end to pick up a chunk of yardage.

The touchdown he allowed to Robert Tonyan was just a great throw and a great catch. Edmunds played it perfectly, and had his hand on the ball and Tonyan hauled it in. Yes, you’d like him to turn around and find the football, but I thought he played it about as good as a corner would.

Nat Berhe on the other hand, yikes. What a dreadful attempt to track down Kumerow as the last line of defense. And to have Thomas run past you in pursuit? Awful.

Additionally, I thought Brian Allen had a terrible night, and just pushed himself to the roster bubble. Allen was called for pass interference in the end zone on Tonyan, setting up a Green Bay touchdown, and then missed multiple tackles throughout the game.

Not a great night for defensive backs. Good luck dealing with Tom Bradley in the next film session.

Jordan Berry is the most maddening punter in the NFL right now.

Despite averaging nearly 45 yards a kick Thursday night, he came up with a few short punts, putting the Steelers’ defense in tough spots.

Yes, Berry boomed a 65-yard punt and had one punt downed inside the 20-yard line, but he is so inconsistent. I’m not sure he’s ever going to figure it out.

Matt Wile went 2-for-2 on extra points on the night, giving Chris Boswell the night off.

The coverage units were hit or miss, aside from Edmunds’ strip and recovery, and the return units just aren’t providing much juice at all.

Cam Sutton got a look as a punt returner finally, but never got a chance to actually return one, while Quadree Henderson flashed on a 27-yard kick return, which was his only opportunity of the night. The Steelers need to do more in the third preseason game to get a guy like Henderson more looks.