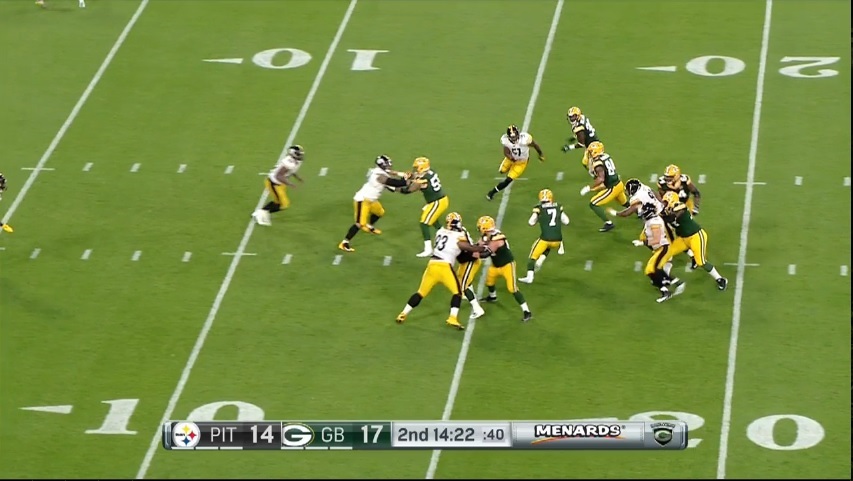 Well, that one certainly wasn’t pretty.

The Pittsburgh Steelers allowed a preseason franchise-record 51 points last Thursday in the second preseason game of the year against the Green Bay Packers. Once again, missed tackles were the story of the night defensively, as Pittsburgh continues to struggle with one of the simplest parts of the game:  tackling.

Aside from special teams, the real concern comes with misses in and around the backfield, with four of Adeniyi’s five coming behind the line of scrimmage, while Malik Golden (three), Stephon Tuitt, LJ Fort, Farrington Huguenin, Jon Bostic, LT Walton, Lavon Hooks, and Anthony Chickillo (two) have all missed tackles at or behind the line of scrimmage through two preseason games.

Tackling was a big emphasis in training camp for the Steelers, but so far things haven’t been working out in that department.

Let’s take a look at the three biggest misses from Thursday’s game at Green Bay.

Through two games, Adeniyi has lived in the backfield as an edge defender. That, in and of itself, is something to really get excited about. However, he continues to consistently make stops behind the line of scrimmage.

Look at the way he’s able to knife through the line here to get into the backfield. He’s got a quick first step, and knows how to get skinny to slip through. He just fails to finish.

Part of it is coming in out of control, the other part if failing to break down. It’s certainly a teachable moment for the young linebacker. It’s a similar problem Ryan Shazier had. No, I’m not comparing Adeniyi to Shazier at all. I’m simply saying both got into the backfield faster than others possibly could, and their speed and athleticism hurt them at times in these scenarios.

This is a rough one from Terrell Edmunds in the short flat. These are the types of tackles he was drafted to make in space.

The rookie does everything right on the play, quickly breaking into the flat with Lance Kendricks at the snap. Where Edmunds goes wrong is in his angle and closing speed.

Edmunds assumes Kendricks will catch the ball and continue towards the sideline. The veteran tight end feels this and is able to come to a stop at the catch point and slip back inside. Edmunds never really used the sideline to his advantage, instead adjusting his angle to the outside of Kendricks, rather than staying even with his inside hip.

It’s another teachable moment for a rookie. I’d rather have these happen now, rather than in a meaningful game.

This one is a disaster right from the start. Not only does Jordan Berry outkick his coverage, Darrius Heyward-Bey tries to jump inside after having outside leverage, allowing himself to get blocked.

From there, break out the Benny Hill music.

Anthony Chickillo comes in out of control and is caught diving at the defender, resulting in an ugly miss for a veteran. Then, Brian Allen — who was dreadful all game long against the Packers — overruns the play and is caught going for an arm tackle at the last second. Yuck.

Heyward-Bey does a good job getting back into the play, but he’s too high on his tackle attempt, easily sliding off. Fortunately, Heyward-Bey’s high attempt slows down the punt returner, allowing the Steelers to wrestle him to the ground.