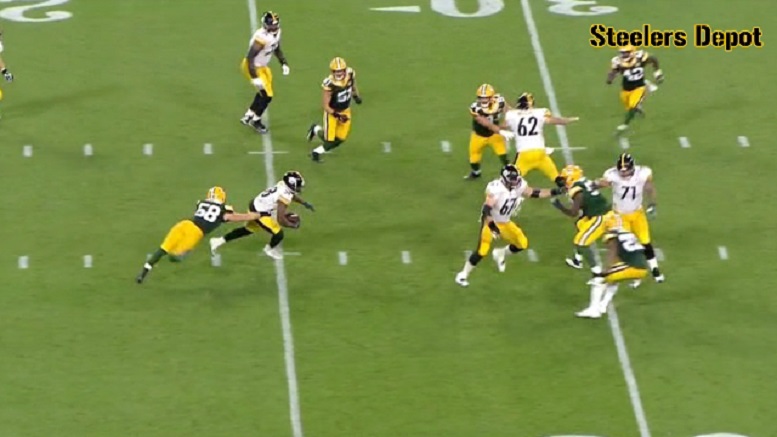 We got to see quite a bit of Pittsburgh Steelers rookie running back Jaylen Samuels during the team’s second preseason game this past Thursday night against the Green Bay Packers as this year’s fifth-round selection out of North Carolina State not only played 41 offensive snaps, he also touched the football 12 times for a total of 51 yards and scored once from a yard out.

While Samuels’ 4.25 yards per touch probably isn’t high enough to get fans excited when they look at that stat in a gamebook, if you closely examine the tape of all 12 of his touches from that contest you’ll see that he did quite a few things good during those dozen opportunities.

Below are a few gif examples of Samuels doing a great job of getting yardage after first contact. Two of these plays are after short receptions while the other is a run attempt in which contact was made with him initially in the backfield.

In addition to those positives that Samuels put on tape Thursday night at Lambeau Field, he also received one solid pass protection rep in the second half as well and below is a gif of that.

While what Samuels put on tape Thursday night against the Packers certainly won’t be enough to guarantee him a spot on the 53-man roster at this point of the preseason, the arrow certainly is currently pointing in the right direction for him entering the team’s third exhibition game.

While Samuels might receive some playing time against the Tennessee Titans next Saturday night at Heinz Field, it might not ultimately be as much as he received against the Packers. However, Samuels should get plenty of snaps in the Steelers preseason finale against the Carolina Panthers.

It should be noted that Samuels also played 14 special teams Thursday night against the Packers. However, I really didn’t see him make much of an impact in that phase and especially during the 7 kickoff returns he was a part of.

Contextualization of Samuels’ Touches Against Packers