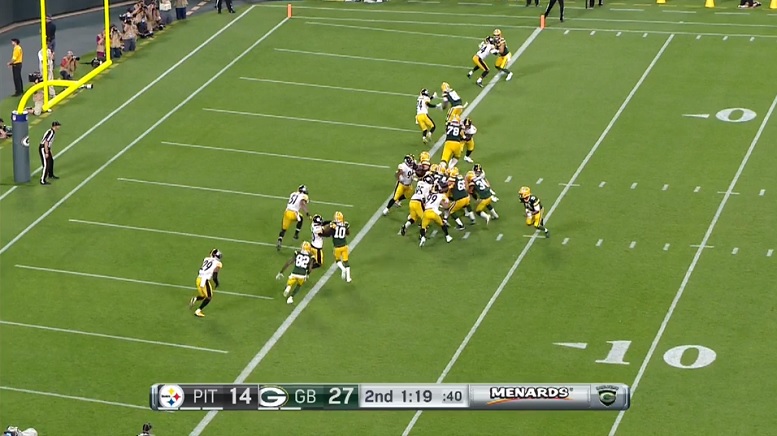 What did you you think about the play of the Pittsburgh Steelers defense Thursday night in their second preseason game of 2018 against the Green Bay Packers? If you’re very disappointed in what you saw, I understand that for sure as the unit gave up five more explosive plays Thursday night with all of them being passes. Additionally, any time a defense allows 37 points in any game it certainly needs to be closely examined. However, you might take some solace in the fact that the Steelers run defense against the Packers was much, much better than in the preseason opener against the Philadelphia Eagles.

The Packers registered 29 total rushes Thursday night against the Steelers for 77 yards and a touchdown. Looking past those base stats you’ll see that 65 of those rushes were by quarterbacks and came via scrambles when forced from the pocket on pass plays. Make no mistake that the Steelers defense didn’t contain against the scrambles very well Thursday night and two of them resulted in successful plays with one being an 8-yard touchdown by quarterback Brett Hundley in the first half. The other one was a 3rd and 2 scramble by Hundley that moved the chains.

As far as the Packers designed runs went Thursday night, they had 24 of those and they resulted in a whopping 56 yards, or 2.3 yards per carry. Even those base stats dont tell the entire story. In fact, only 4 (16.7%) of those 24 running back rushing attempts went in the books as successful runs and only one of those 4 came in the first three quarters on 14 total attempts.

Those other three successful run attempts came in the fourth quarter and two of them with less than 4 minutes remaining in the game. The Steelers front seven during that stage of the game included inside linebackers Keith Kelsey and Matt Galambos and in the trenches were Patrick Cothren and Greg Gilmore.

The longest rush allowed Thursday night to a Packers running back was 18 yards and Joel Bouagnon was responsible for that on a 3rd and 1 with 12:18 left in the fourth quarter. He should have been stopped at the original line of scrimmage by safety Malik Golden, however, he missed the tackle and a few more missed tackles later Bouagnon had an 18-yard gain. Cherry pick out that run and the Packers running backs had 38 yards on 23 carries, or an average of 1.65 yards per carry.