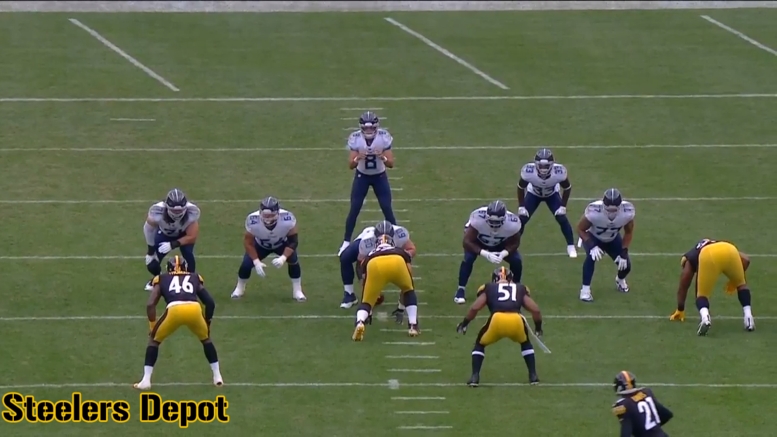 On Saturday prior to the game against the Tennessee Titans, Pittsburgh Steelers Head Coach Mike Tomlin talked about how one of the key facets of the third preseason game was “the utilization of people, the specialization of talents”.

What he was referring to was the expansion of the use of different sub-packages, both in terms of the type of personnel that was on the field as well as the specific players that are used in given circumstances. While he mentioned Jaylen Samuels possibly being used with the first-team group, it was actually another rookie who would end up showing out with the starters.

That was college free agent inside linebacker Matthew Thomas out of Florida State, around whom the coaching staff has evidently developed what they called the ‘Seminole’ package. The Steelers used the athletic linebacker in place of outside linebacker Anthony Chickillo in passing situations.

Said the rookie, “I did think it was a big deal, just being out there with the first team”. Prior to the game, Thomas had primarily been working with the third-team defense behind Tyler Matakevich and L.J. Fort, who of course were working behind starters Jon Bostic and fellow Seminole Vince Williams, he of the shiny new contract extension.

The Steelers would used this look a handful of times during the game, which could possibly be an indication that it’s something that they have the intention to carry with them into the regular season. This was a look that we had not seen nor heard about during the offseason or in training camp, so perhaps it was developed behind that ‘mystical’ tarp that was recently installed inside the walls of the UPMC Rooney Sports Complex.

While his play was not flawless, Thomas did end up making some plays, both with the starters and later in the game, and on special teams as well. I will probably take a look at his snaps in a film session prior to Thursday’s game if nobody gets to it before I do.

It’s worth noting that this was not used exclusively on third or fourth down. I believe the first snap on which he was brought into the game was actually a second and long situation. That does reflect the reality of the NFL today that virtually every down is now a passing down.

It’s important to emphasize that just because they used this package in the preseason, though, doesn’t mean that it’s going to be something that they will run in the regular season, despite my earlier comments. It could just have been a way of getting a look at the rookie in a different context to help in the evaluation process.