While it seems as though most of the Pittsburgh Steelers fanbase is focusing on the performance of quarterback Joshua Dobbs last night, perhaps they should be expressing greater interest in the fact that rookie third-round draft pick Mason Rudolph showed great strides in his preseason finale against the Carolina Panthers.

After all, Rudolph is the player that the team intends to groom as their heir apparent. He is the one the team is looking at to potentially be the successor to Ben Roethlisberger, the next face of the franchise. He is the one to whom the developmental resources are going to be devoted. So maybe we should acknowledge him? Maybe? I don’t know.

Dobbs started the game and saw action through most of the first half, leading the team to 17 points on four drives, but when the Steelers got the opportunity to run the two-minute offense on a short field, the coaching staff elected to put in Rudolph, likely because they wanted to see how he would respond in that situation.

Pittsburgh got the ball on the Panthers’ 29-yard after Olasunkanmi Adeniyi recorded strip sack that Keion Adams recovered. Rudolph immediately connected with Trey Griffey on first down for 15 yards down to the 14-yard line before firing off an incompletion into the end zone..

On second down, Rudolph would scramble for eight yards down to the six, but a holding call on Chukwuma Okorafor called it back, making it second and 10. He then nearly hit the home-run ball to Damoun Patterson, but the rookie receiver allowed the ball to fall out of his possession while he was on the ground. But he came back on the next play to throw a bullet to Tevin Jones for the 24-yard touchdown on third and 20 in between three Panthers defenders.

Rudolph kept the ball on the two-point conversion attempt after escaping pressure and seeing a lane for himself. After a defender took an unnecessary shot on him in the end zone that should have been a penalty, he got into his face, drawing a taunting call. I take that as a plus.

His second drive got off to a bad start after he botched the under-center exchange on second down and then was sacked on third down (against a free rusher on a blown assignment), resulting in a three-and-out, but he responded on the next series by leading another touchdown drive.

His receivers didn’t do him a lot of favors on that drive, with Tevin Jones and Pharoah McKever both dropping catchable passes, the latter in the end zone, but he eventually connected with Quadree Henderson for the score after evading pressure and throwing across his body as he rolled out to his left.

From that point on, the offense played highly conservatively, as exhibited by the fact that Jarvion Franklin got eight carries. It was 37-10 at that point and they’d seen enough. They saw the kid they thought they were getting when they traded up to draft him. Which is probably why Tomlin looked like this after his touchdown to Jones: 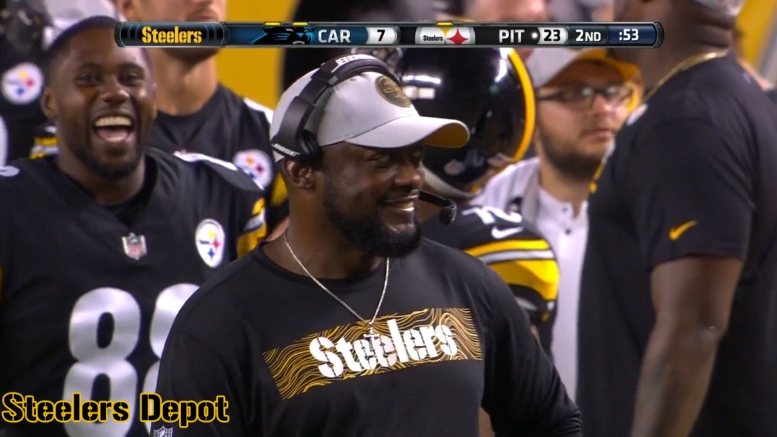