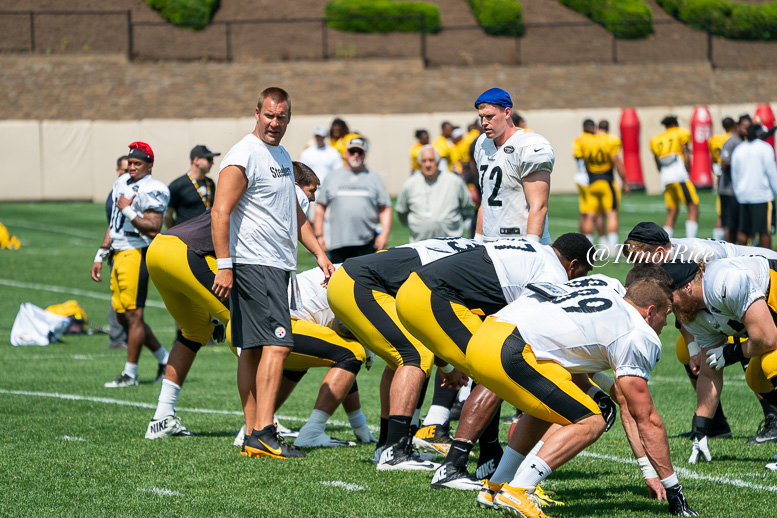 Home stretch. Only one preseason game left, largely populated with players who won’t make the 53 man roster. Not many changes left after this one and the cutdown day is less than a week away. My Pittsburgh Steelers prediction.

Analysis: It’ll be Josh Dobbs getting a long look against Carolina but time is up. No path to the 53. So these will be the three.

Analysis: With Ryan Switzer getting first crack at kick return work. Toussaint’s main role is diminished. Samuels has impressed the last two games and he’s versatile enough to find playing time for, whether that’s on offense – mostly split out as a receiver – or special teams.

Analysis: Locked in from the moment he signed his contract.

Analysis: Switzer deal helped clarify this group. He’ll make it as the #5 and active on gamedays. Hunter will have a seat on the bench until there’s an injury, just like last year.

Analysis: I’m going to trust Kevin Colbert on this one and assume all three of these guys, we know James is back, are ready for Week One. If not, a roster move could happen. Two names to watch? The Jets’ Jordan Leggett and the Lions’ Michael Roberts to be candidates for the #3 spot.

Analysis: Have had eight on my roster every time I’ve done one of these. More and more confident of it each time. Okorafor has impressed and I think lessened the need to bring in a tackle, though I don’t discount it entirely.

Analysis: Although McCullers is out with injury, he’s done enough positively to have a cushion between he and whoever else is chasing for his spot. The competition behind him hasn’t been impressive enough anyway and Keith Butler has openly said the Steelers’ run defense needs to improve.

Analysis: Tough luck here for L.J. Fort, a man I’d like to keep but the team doesn’t seem to value anything higher than a special teamer. He’s this year’s Steven Johnson. Thomas becomes a near-lock after running first-team in sub-package football against the Titans.

If I include the assumed 54th spot on the Le’Veon Bell roster exemption, Fort would be the guy.

Analysis: Adeniyi is no longer the 54th man on the roster following another impressive performance versus Tennessee. Gameday inactive but you have a potential starter down the line, maybe as soon as 2019. For now, he makes the 53 to ensure he isn’t poached.

Analysis: This is where the roster gets really complicated. Keeping Sensabaugh one more time to round out the cornerback room and give the Steelers some excellent depth. Not convinced Brian Allen has taken the jump I hoped and expected in Year #2.

Analysis: Got off the Jordan Dangerfield train at the first available stop. He didn’t play well against Tennessee but what hurt him more was a healthy and productive Marcus Allen. With Dangerfield retaining practice squad eligibility, you can put him there again if you want.

Analysis: Not nearly as convinced there’s a punter battle as Dave Bryan is. Berry still the guy though Matt Wile has a booming leg. I’ll give him that.

Analysis: Couple shake-ups here. Added a RB to this after only having three on the 53, though I think if they keep someone, they’ll add a player who was cutdown. Franklin nor James Summers are really worthy of being here. Tucker and Patterson stay pretty much where I’ve had them throughout this whole process. The fact they’re keeping Patrick Morris around, injured for the last two weeks, tells me they like him. So swapping R.J. Prince and get Morris back on here. Much more confident in last week’s decision to put Banner in for Jake Rodgers.

Hooks beats out Joshua Frazier and the rest of the field. Huguenin has shown some improvement his second year with the team. Kelsey rounds out ILB depth while I finally find a home for Golden. Dangerfield is probably on speed dial if you need him.