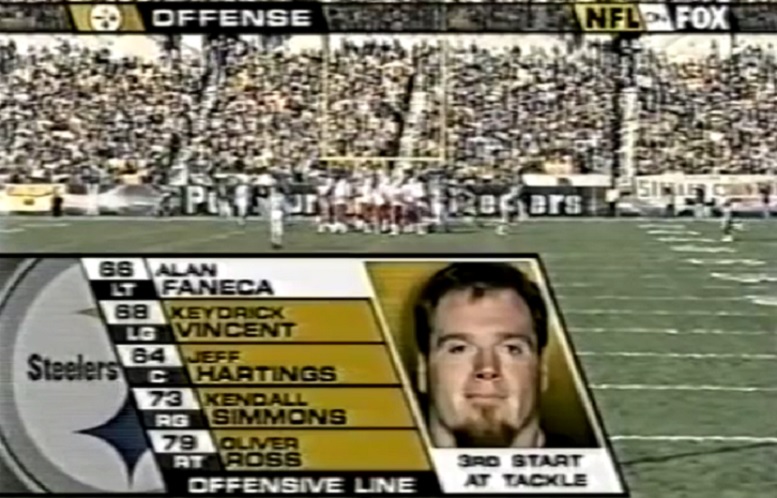 A year from now, hopefully we’re readying ourselves for the induction of former Pittsburgh Steelers guard Alan Faneca into the Pro Football Hall of Fame as a member of the Class of 2019. While it’s somewhat surprising that Faneca is still waiting to be voted into Canton, you have to believe it will eventually happen. In the meantime, however, I thought I would dedicate a post during this slow period of the offseason to the season that Faneca had to play left tackle for the Steelers and how that position move likely cost him a First-Team All-Pro award.

Due to a pinched nerve in his shoulder suffered early during the 2003 season by starting left tackle Marvel Smith, the Steelers coaching staff ultimately decided that Faneca would be their best choice to replace him. Faneca, who had not played left tackle since high school, seemingly took the position switch in stride and wound up starting nine games at left tackle that season with his first start coming in the team’s Week 6 road game against the Denver Broncos.

While Faneca did start the game at left tackle, he also played his original left guard position some as well as third-year back-up Mathias Nkwenti was brought in to play left tackle on some obvious passing downs. However, a back injury suffered by Nkwenti brought a quick end to that future position swapping during games as he was soon placed on the team’s Reserve/Injured list. That meant that Faneca was left to play most all of the remaining snaps at left tackle that season when Smith wasn’t healthy enough to suit up.

The Steelers ultimately went 3-6 in the nine 2003 regular season games that Faneca started at left tackle in and while he was voted to the Pro Bowl that year, he failed to make first-team All-Pro and that was the only time from 2001 to 2007 he didn’t receive that distinguished award. Had he not unselfishly moved to left tackle during the 2003 regular-season, we’d probably be talking about Faneca being a seven-time First-Team All-Pro selection. Hopefully the Pro Football Hall of Fame selection committee takes Faneca’s 2003 season into consideration some the next time they convene.

In case you need reminding as to how great of a guard Faneca was during the 2003 season, below is an animated gif of him running the Slant 39 Boss play against the Cincinnati Bengals during the team’s Week 3 game. Watch him pull left and strike Bengals linebacker Adrian Ross so hard that his helmet flies off. Later in that same game, Faneca again flattened Ross while blocking during a power counter play.