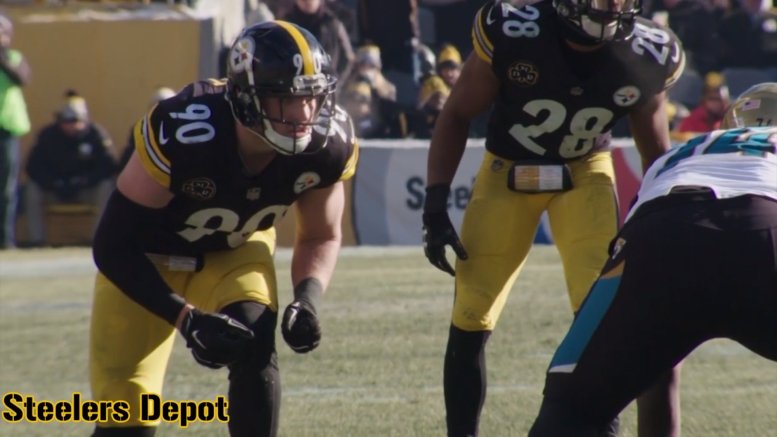 The Pittsburgh Steelers reportedly spent the entire duration of spring practices with the outside linebackers flipped in comparison to the sides that they played during the 2017 season. Bud Dupree had been the left outside linebacker since he was drafted in the first round in 2015, and T.J. Watt slid immediately into the right side as a first-round pick a year ago.

They were playing on the sides opposite to that which they had been accustomed so far during their professional careers, the Steelers reportedly sincere in their plan to move the two to opposite sides in the hopes that it would create a better defense.

We should see over the course of training camp whether or not that plan sticks. The Steelers intended to flip Marcus Gilbert and Mike Adams leading into the 2013 season, Gilbert moving to the left side and Adams on the right, practicing in that alignment for a short time until it was abandoned, evidently not working as they’d hoped.

I personally find myself on the optimistic side in terms of whether or not the switch will be advantageous to both players individually and to the defense as a whole. I think that Watt’s skillset is suited to playing on the left side, which has traditionally dropped more in coverage. The plan was for Dupree to drop more heading into the season before Watt proved himself so capable of doing it.

It’s still not clear if the intention is to make this a full-time move or simply to create more versatility between the two that would allow the Steelers to switch them around within a game to target specific matchups or create confusion for the offense.

For their part, both Dupree and Watt have given their approval of the move to the media. Dupree was optimistic about it being able to create more opportunities as a pass-rusher for him, and Watt said that he believed his hand usage would be more effective on the left side, and that he would be more comfortable doing it.

There might, quite frankly, be a lot of moving parts at the linebacker position this year. The starting job at the mack at inside linebacker is not even settled yet, to be determined during training camp between Jon Bostic and Tyler Matakevich, and for all we know the Steelers might end up using more than one player to man that spot if they are not comfortable with one.

Even as it pertains to Vince Williams, he is a player that comes off the field when the teams uses its dime defense, and that is a package that only looks to be expanding rather than contracting. The Steelers have about seven or eight defensive backs that they would like to see on the field as it is.