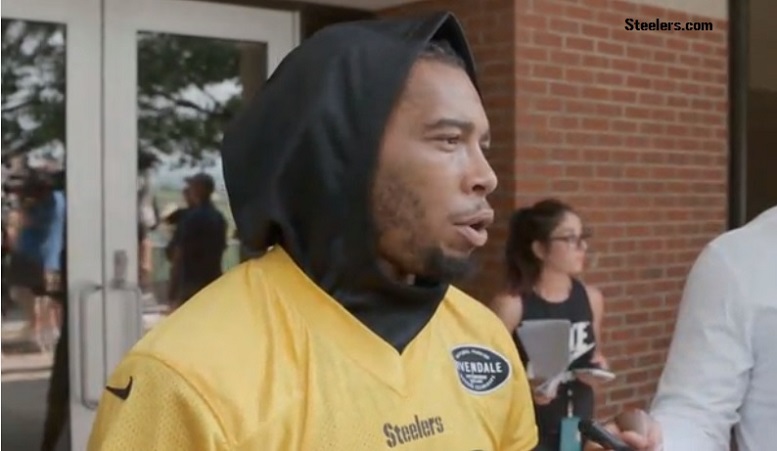 Even though they both were with the team all throughout the 2017 season, Thursday was officially the first training camp practice in Latrobe for Pittsburgh Steelers tight end Vance McDonald and cornerback Joe Haden as the team added both players last year after their time at Saint Vincent College in Latrobe was over. At the conclusion of Thursday’s training camp practice, Steelers head coach Mike Tomlin was asked to comment on how valuable it is to have both McDonald and Haden around for a full offseason and especially all of training camp.

“You know, I’m sure they’re excited about it,” Tomlin said. “I know that I’m excited about having them. It’s just it’s always good to be on the train when it leaves the station. You don’t learn any lessons secondhand, you see the totality of the process. I think everybody benefits from that and I think it helped those guys being the solid, intelligent veterans that they are, that they were able to perform in a manner which they did [last season], but if you ask them, I’m sure that they’re excited about being on day zero.”

Interesting and disappointing enough, both McDonald and Haden respectively missed quite a few games last season due to injuries. For McDonald it was back, ankle, knee and shoulder injuries that prevented him from playing in six full games and parts of a few others. As for Haden, it was a broken fibula that forced him to miss five full games during the second half of the regular season. Both players have already talked quite a bit during the spring about how good their offseasons have gone this year and especially Haden, who for the first time in a few years didn’t have to rehab from a surgery. He was asked Thursday afternoon before practice how beneficial he thinks it will be for him to go through an entire training camp with the Steelers.

As for McDonald, who only caught 14 passes for 188 yards and a touchdown during the 2017 regular season, he showed why the team traded for him in the playoff loss to the Jacksonville Jaguars as he recorded 10 receptions for 112 yards in that contest. He’s already gotten a little practice time in with quarterback Ben Roethlisberger during the team’s offseason practices and now looks forward to getting even more time with him while at Latrobe.

“That’s continued over the offseason,” McDonald said Thursday afternoon. “We all know what OTAs are like and what minicamp is like for Ben, but still, we take care of the opportunities that we get and we getting together outside of the facility and stuff. And so it’s been really nice and we’ll continue that.”

If McDonald and Haden can both remain fully healthy in 2018, both players should be expected to make significant contributions for their respective sides of the football. In fact, it wouldn’t be a total shock if McDonald has a career year and for Haden to have a season similar to the one he had in 2014 with the Cleveland Browns, the last time he was voted to the Pro Bowl.