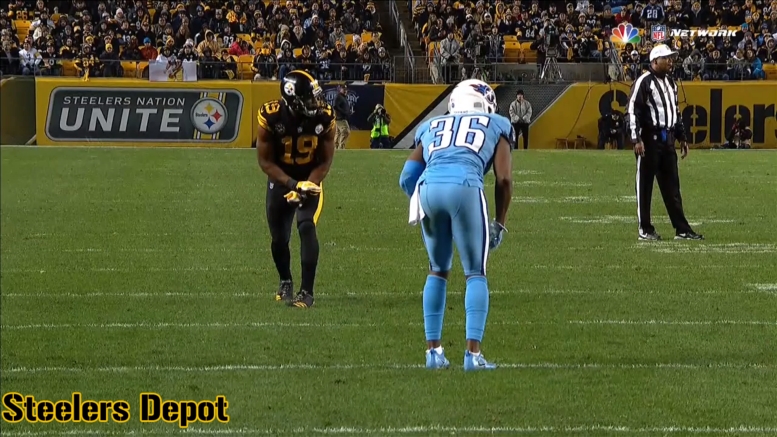 The Pittsburgh Steelers spend about 60 to 65 percent of their time on the offensive side of the ball using three or more wide receivers on the field at the same time. that means that for up to about two third of their snaps, they make use of a slot receiver.

The question that they will have this season is how they divide those slot snaps, now that both Martavis Bryant and Eli Rogers are gone. The simplest solution would be to move one of their starters, second-year JuJu Smith-Schuster from the outside inside into the slot when they bring a third receiver onto the field.

But they don’t have to do that, at least not all the time. They could choose to take a more varied approach than they have in years past, utilizing a wider variety of players to move into the slot, including both Antonio Brown and rookie James Washington, a player that they have actively talked about with respect to moving positions.

Washington has a lot in common as a player with Smith-Schuster, including a seemingly accelerated development. Smith-Schuster sort of opened his career in the slot because he had to, with Brown and Bryant on the outsides, and that was his way onto the field. But he was primarily an outside receiver in college.

The Oklahoma State product was also primarily used on the outside, but wide receivers coach Darryl Drake and offensive coordinator Randy Fichtner have both talked about using him out of the slot as well. Even Smith-Schuster mentioned something to that effect, giving the rookie advice about how to be physical from the inside.

The Steelers do give Brown some time out of the slot as well. In my charting, when the team has been in 11 personnel, he took 680 snaps out of three-receiver sets. 77 of those snaps were out of the slot, which is a little over 11 percent.

Personally, I see a lot of room for expansion here that the Steelers should seriously consider rather than just feeding Smith-Schuster into the slot, who also had success on the outside last year. Brown could certainly play more than 100 snaps out of the slot, from which position he caught touchdowns of 10 and 51 yards in 2017.

Provided that they are comfortable with Washington’s early progression, the team could have three players, or even more, among which to distribute these slot snaps, which would provide a greater number of looks and possible matchup advantages they can put themselves in.

The bottom line is this: Pittsburgh has an opportunity this season, under a new offensive coordinator, with two young wide receivers who are still malleable, to create an offense that is even more variable than it has been previously, if they choose to take it. I think it’s an approach worth exploring.