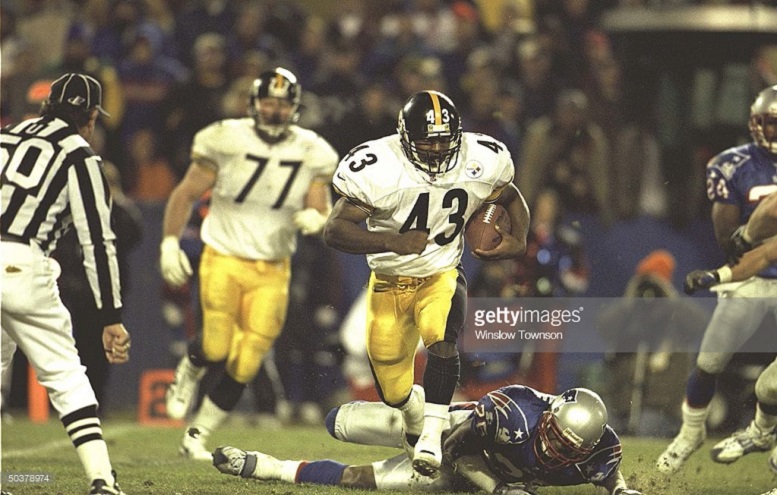 I’ll now continue this series with a look back at the last Steelers player who wore No. 43 before safety Troy Polamalu wore it and made it famous.

In 1997 the Steelers spent their fifth-round draft selection on running back George Jones, who finished his college football career at San Diego State after transferring from Bakersfield Community College in 1995. At San Diego State, Jones rushed for 2,810 yards and 34 touchdowns over the courser of two seasons and caught 34 total passes for another 238 yards. Ahead of the 1997 NFL Draft he reportedly ran his 40-yard dash in 4.55-seconds.

During the Steelers five-game 1997 preseason, Jones led the team in rushing with 254 yards on 47 carries and he ultimately made the final roster as the backup to starter Jerome Bettis. During the 1997 regular season Jones rushed for 235 yards and a touchdown on 72 total carries and caught 16 passes for another 96 yards and a score. His receiving touchdown, an 11-yard score via a shovel pass, came against the Cincinnati Bengals in Week 8 and from quarterback Kordell Stewart early in the second quarter. His lone rushing touchdown, a one-yard plunge, came in Week 11 against the Baltimore Ravens and midway through the fourth quarter. Jones, however, did fumble three times during the regular season and lost two of those.

After starting the Steelers 1997 regular season finale against the Tennessee Oilers in place of a resting Bettis, Jones was inactive for the team’s two playoff games against the New England Patriots and Denver Broncos.

Jones was back at training camp with the Steelers in 1998 but he failed to make the final roster that year as he was beaten out by fellow running backs Richard Huntley and Chris Fuamatu-Ma’afala. He was waived by the Steelers in late August and was ultimately signed by the Jacksonville Jaguars in late September. He finished the 1998 regular season with 121 yards rushing on 39 carries and also had one reception for 9 yards.

The Jaguars parted ways with Jones prior to the start of the 1999 regular season and the running back was eventually signed by the Cleveland Browns. After rushing for just 15 yards on 8 carries with the Browns, Cleveland released him that November and his NFL career was then over.

Surprisingly, no Steelers player wore No. 43 during the regular season for five full years after Jones wore it during the 1997 season. Finally, Polamalu, the team’s first-round selection in the 2003 NFL Draft, was issued the number he had worn during his college career at USC.