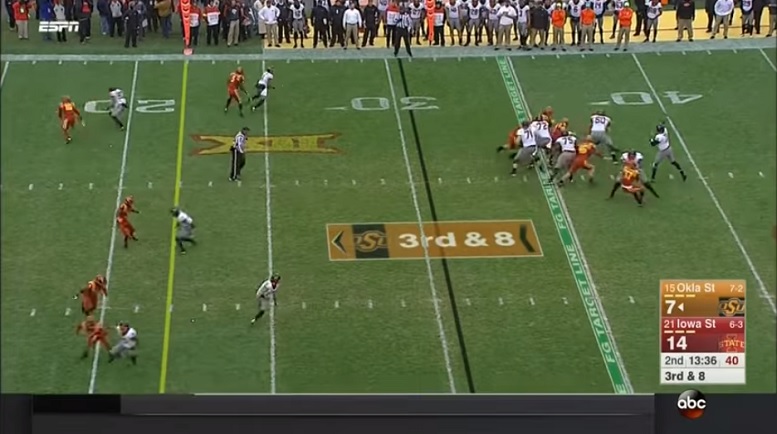 Obviously, an offense’s ability to convert third-downs plays a large role in how successful that unit is in the game of football and most of the time the quarterback has to pass on that down. If you’re like me, you cringe a little every time you see a quarterback attempt a third-down pass that’s intended for a player short of the first down marker. Thanks to advance stats, we now have one dedicated to quarterbacks throwing short of the chains (ALEX) and I monitor it quite frequently during the NFL season. Thankfully, Pittsburgh Steelers quarterback Ben Roethlisberger is usually ranked in the top 10 when it comes to the positive side of that statistic.

While we all hope Roethlisberger plays several more seasons for the Steelers, I thought now would be a great time to look at the third-down stats that rookie quarterback Mason Rudolph posted during the 2017 season for Oklahoma State and especially when it came to him throwing at or beyond the chains on that down.

In total, Rudolph attempted 102 third-down passes during the 2017 season and he completed 61 of them for 852 yards with 9 touchdowns and an interception. 51 (50%) of those attempts wound up being conversions and that’s obviously a solidi percentage and one you’d expect a top college quarterback in a draft class to have. To put that into some sort of perspective, Baker Mayfield, this year’s No. 1 overall selection in the draft, converted 43.0% of all his third-down passing attempts in 2017.

So, how many times did Rudolph throw for or past the chains on third-downs in 2017 and what was his average pass distance thrown in relation to the sticks?

71 of Rudolph’s 102 third-down pass attempts in 2017 were either right at the third down marker or beyond it and that means his short percentage was just 30.4%. That would have easily landed him in the top 10 in the NFL last season and even way ahead of Roethlisberger’s 35.7% number. Just so you know, Rudolph completed 41 of those 71 pass attempts. Rudolph’s average intended air distance on those 102 third-down pass attempts was 11.45 yards past the original line of scrimmage with his average intended completion distance past the original line of scrimmage being 10.39 yards.

Rudolph posted an ALEX stat in 2017 of 3.46 yards. That means that, on average, he threw 3.46 yards more than what was needed on third-downs. That 3.46 number would have been the second-best in the NFL last season. In case you’re curious, Rudolph’s ALEX stat on completed third-down passes in 2017 was 2.72 yards.

So, what about third-downs in 2017 that included the Oklahoma State offense passing when 10 or fewer yards were needed? After all, that might be handy to know because quite honestly, asking any quarterback to consistently throw to the sticks or beyond them when 10 yards or more needed is absurd.

Last season, Rudolph attempted 82 third-down passes in which 10 or fewer yards were needed and his ALEX stat on those throws was 4.06 yards. He completed 50 (61%) of those attempts and 45 of those resulted in successful plays. His ALEX on those 50 completed third-down throws was a robust 3.06 yards.

Obviously, posting nice third down stats in the Big 12 isn’t the same as doing it in the NFL but with that said, at least Rudolph showed during his college career at Oklahoma State that he’s not afraid of throwing for or beyond the sticks and was even successful at doing it. We’ll now have to wait and see if he’s able to be consistent and successful doing so at the NFL level and hopefully that wait will be at least three years.