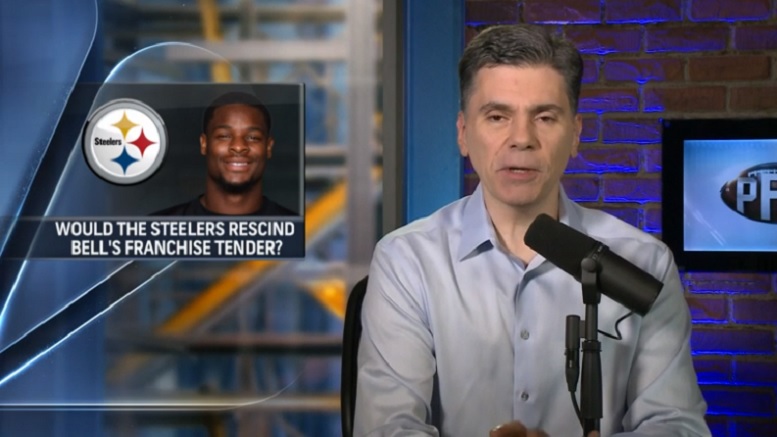 During game days throughout the NFL season I envision Mike Florio of Pro Football Talk rooting hard for the Pittsburgh Steelers to beat whatever team they are playing. Between games, however, I also believe Florio gets great joy out of taking shots at the Steelers organization. Florio has covered the NFL for quite a while now and his background as a lawyer certainly helps to some degree when it comes to understanding several intricacies of the CBA. However, in Florio’s most-recent bashing of the Steelers and how they presumably poorly handled their failed contract negotiations with running back Le’Veon Bell, I think he failed to think one aspect of his post all the way through.

After first griping about how the Steelers final offer reportedly only included $10 million or so in fully guaranteed money and how that supposed deal made the Steelers “look disingenuous and delusional,” Florio ended his post with this little bit of speculation.

“Which requires keeping a close eye on the possibility that, come late August, the Steelers will rescind the franchise tender before Bell can accept it,” Florio ended his post with.

While the Steelers certainly still have the right to rescind Bell’s $14.544 million franchise tag at any time before he signs it, it’s really hard to believe they would take such a course of action unless something really unforeseeable happened such as a serious injury or another suspension and here is why. I double-checked with former NFL agent Joel Corry Wednesday morning and he informed that if the Steelers were to ultimately rescind Bell’s tag that it would result in them not qualifying for any compensatory draft pick value due to such a transaction coming after the league’s deadline.

For those of you who think the Steelers should trade Bell prior to the start of the 2018 regular season, that’s also very unlikely to happen. First, Bell would need to sign his tag so that he could be traded and then the Steelers would need to find a team willing to part with enough in compensation to make such a trade worthwhile. Oh, and Bell is going to want some sort of big money long-term deal in place ahead of time that includes a lot of guaranteed money before agreeing to sign his tag. In short, it would be shocking if a trade happened.

Florio’s rants about how the Steelers don’t offer a lot of FULLY guaranteed money as part of long-term contracts for non-quarterbacks has gone on for quite a while. While that’s not some sort of breaking news, Florio doesn’t ever mention the fact that the Steelers have a long history of paying out the full, or near full amount of long-term lucrative contracts.

To hear Bell’s agent talk, the Steelers low guaranteed money offered to his client was the main reason why a deal wasn’t able to be consummated. While there have been several numbers related to the Steelers declined offer floating around since Monday afternoon, we still don’t know for sure how many of them are absolutely correct. Additionally, we still don’t know for sure what Bell’s 2018 take was going to be. In all likelihood, that amount would have been around $20 million, as I have posted previously, and while maybe only $10 million or a little more of that may have been the only FULLY guaranteed amount, Bell was very, very, very likely to get all of it.

Florio’s rant about the Steelers and guaranteed money wasn’t surprising as it’s what he does. However, he should have at least thought through his speculation about the Steelers possibly rescinding Bell’s tag more and especially if he’s as big a fan of the team as I think he is. He did, however, try to save a little face in a different Wednesday morning post about the real possibility of Bell’s tag rescinding happening but even that included a dubious statement centering around the Steelers being “upset” that Bell turned down another best offer.

“Rescinding the tender remains an unlikely outcome, but it’s not all that difficult to see the dominoes fall in a way that would prompt the Steelers to choose to accelerate their looming divorce with Bell by four or five months — especially if they’re upset that he refused their latest long-term offer,” Florio wrote.

While the Steelers might indeed be upset some that Bell chose not to sign, they’re not going going to rescind his tag just because of that.

Oh, don’t even get me started on Florio’s suggestion that the Steelers could potentially sign veteran free agent running back Adrian Peterson to pair with James Conner should they ultimately decide that rescinding Bell’s tag is a good idea, which it isn’t.