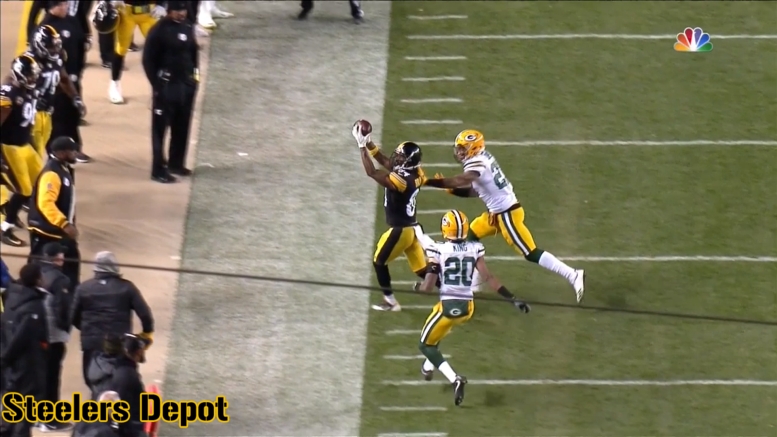 In less than a week, Pittsburgh Steelers wide receiver Antonio Brown will turn the fine age of 30-years old. Through all the fun and record-breaking achievements Brown has surmounted throughout his twenties, the notion of the Steelers’ most decorated playmaker getting old has been nonexistent. And let’s get one notion straight, this is not an impending doom piece on Brown’s future as there is no reason to question his NFL mortality.

After all, this is the receiver who up until last season had not had an injury since 2012. This is a receiver who appears to spend more time working out than any other athlete in the league. This is the heart and soul of the Steelers’ team, a model of consistency, a model of excellency and rising above adversity. You can not take that away from Brown.

This is an awareness piece, a historian’s look into the past, into the effects that the number 30 as it relates to age has done to wide receivers throughout the league’s history.

To understand what father time does to receivers after turning 30, first let’s put Brown’s current career numbers into perspectives. While many receivers may gradually decline into their thirties, few receivers can share the same common ground that Brown has built for himself. Heading into the 2018 season, Brown has recorded 733 receptions for 9910 yards.

The Cardinals’ Larry Fitzgerald is the only receiver to have more receptions and receiving yards than Brown before reaching the age of 30. (Fitzgerald had 764 receptions for 10,413 yards before his age 30 season.)

Father time is perhaps the equivalent of Marvel supervillain Thanos, who’s primary objective was to wipe out 50-percent of the universe. As we see above, more than 50-percent of those occasions have been wiped out once the receivers reach their thirties.

For a simpler approach, let’s use the figures of 100 receptions and 1000 yards. These numbers are still an incredible feat regardless of age and it would still be suitable for a player like Brown heading into his thirties.

Thanks to Pro Football Reference, the data shows that there have been 29 occasions of receivers producing at least 100 receptions with 1000 yards during their thirties as compared to 66 occasions of the same stat line being produced by receivers in their twenties.

The data also shows that these 29 occasions are shared by a total of 19 receivers. Only seven receivers managed to do it more than once, with the leader being Fitzgerald with three seasons of at least 100 receptions and 1000 yards during his thirties. 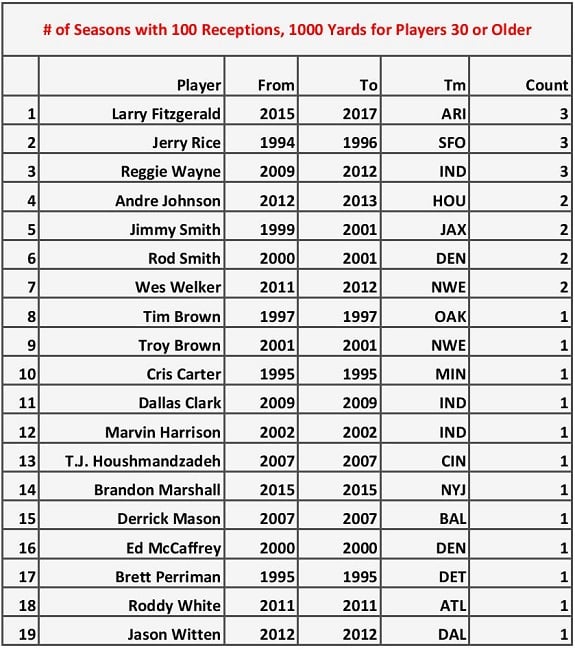 Fitzgerald may be the model of consistency that Brown looks to mimic into his thirties. While Fitzgerald’s numbers may not be as eye popping as Brown’s, both receivers have enjoyed a consistent bill of health and production.

The study shows that unless your surname is Fitzgerald, father time’s odds of affecting productive receivers into their thirties is about a fifty-fifty chance. For many, these odds can be concerning but for a receiver like Brown, they may not even evoke a single ounce of fear.

Brown has had substantially less than fifty-fifty odds his entire career. He walked on to Central Michigan originally as a quarterback before transitioning to wide receiver. He was then drafted in the sixth round, the 22nd of 27 receivers selected in the 2010 Draft. In fact, even the Steelers selected another wide receiver (Emmanuel Sanders in the third round) before Brown. The wide receiver was then buried on the Steelers’ depth chart as a rookie before surpassing the likes of Sanders and Mike Wallace to become a household name.

All these circumstances gave Brown less than a fifty-fifty shot at succeeding, yet here he is, standing in a league of his own. As he approaches thirty, a fifty-fifty shot may not be a cause of fear for Brown but perhaps a cause for relief.

Only time will tell.