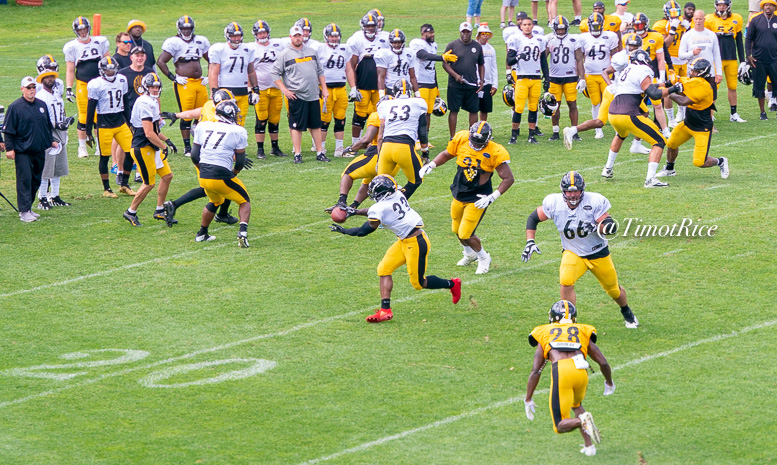 Day four of practice, hitting the dog days of this first stretch of practices. Should still be in pads and another important day of work ahead of the Pittsburgh Steelers. We’ll speed through a couple things to keep an eye on before I crash for the night.

– Ben Roethlisberger should get his first padded practice. How much does that limit the reps of others? Curious to put the numbers on it. Josh Dobbs hasn’t been bad but looking for him try to stretch the field vertically as Landry Jones and Mason Rudolph have done.

– Solid starts for James Conner and Jaylen Samuels. Looking for them to continue and per other media reports, Samuels to get a little better in pass pro (which was totally expected). Jarvion Franklin and James Summers have been buried. Hope they can get some quality reps that garners a longer look.

– More of the same as I wrote yesterday. Xavier Grimble still a quiet start, only one or two catches in team drills so far. Ryan Malleck has had some tough days and Pharoah McKever has had issues with his lower leg drive on the blocking sled.

– Obviously, we’re all waiting to see what’s going on with Ramon Foster. He’s not going to practice tomorrow, meaning the Steelers are down to 14 healthy offensive linemen, and Maurkice Pouncey might be due for a day off or half-day. Wouldn’t be surprising for them to make a roster move.

– Joshua Frazier flashed in a couple of the OL/DL one-on-one reps. I need to take a closer look at him. Feels like he’s showing some quickness that was in his scouting report coming out of Alabama. Felt like Lavon Hooks got close to making the team last year but he’s stuck as 3rd team RDE right now. Hoping for a strong practice.

– Interest still sky-high in the position. Hard to peg a single name. Want to keep watching Tyler Matakevich, who had a nice session yesterday, Jon Bostic, a little quieter, and Darnell Leslie, who continues to catch my eye.

– Liked the work from T.J. Watt and Bud Dupree overall yesterday. Ola Adeniyi had one of the best practices of anyone I saw in the first day in pads. Could earn some buzz as a camp sleeper.

– Like what Coty Sensabaugh has done the first three days. Making James Washington work for everything. Cam Sutton tougher day yesterday. And I liked how Dashaun Phillips mixed things up in the run game. A little Mike Hilton like with the want-to and willingness to sacrifice his body.

– Terrell Edmunds has been quiet in team drills, though the first team reps are valuable (he’s definitely been more box safety, replacing Morgan Burnett) but did well in WR/DB. Malik Golden had a good practice, flashing ball skills and playmaking ability. Let’s see if he can stack good days. Waiting on Nat Berhe’s first bone-crushing hit, too.