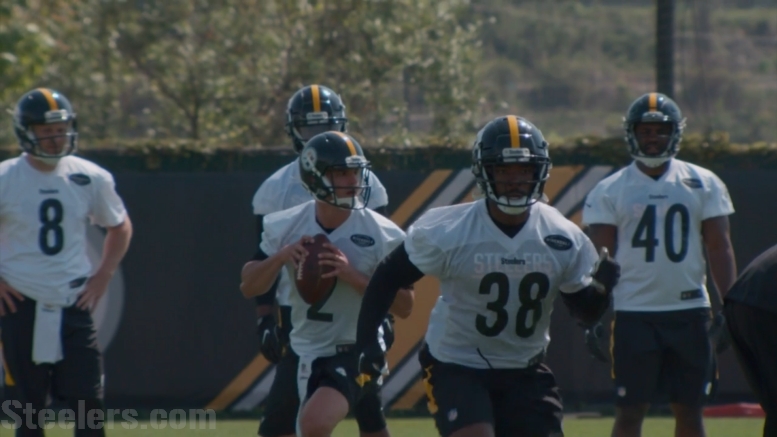 We can’t afford to get ahead of ourselves here because of the awfully large elephant not in the room, but Pittsburgh Steelers rookie running back Jaylen Samuels told reporters during minicamp that he got the opportunity to run a bit with the first-team offense during select passing situations.

The fifth-round pick out of NC State became a prolific pass-catcher as an H-back in college, recording 75 receptions during his senior season. He caught 201 passes in total for 1851 yards and 19 touchdowns, almost all of that coming over his final three seasons. He actually had more receptions than rushes, though he had 28 rushing touchdowns.

“When Steelers coaches put in plays where backs had to split out or were otherwise expected to catch the ball out of the backfield, Samuels got reps alongside the starters”, Jacob Klinger wrote for Penn Live, as the running back himself informed him.

“Going into a season that’s set up to be one of the most intriguing both from a narrative and personnel standpoint, Samuels’ role in the offense will be one of the most fascinating aspects of training camp and perhaps the campaign as a whole”.

The aforementioned elephant would obviously be Le’Veon Bell, the Steelers’ star running back who is currently away from the team and will remain so until just before the regular season begins unless he and the team reach an agreement on a long-term contract over the course of the next four weeks or so.

While it is reasonable that the Steelers would want to get Samuels some work with the first-team offense in passing situations when the other options are James Conner and Stevan Ridley, Bell is himself an excellent pass-catcher, and even fancies himself a wide receiver.

Bell has averaged 42.9 receiving yards per game over the course of his entire regular season career—62 games—catching 312 passes for 2660 yards and scoring seven receiving touchdowns. During the Steelers’ postseason loss to the Jacksonville Jaguars last season, he caught nine passes for 88 yards with a touchdown, including a beautiful catch for a 19-yard score over Telvin Smith. He also scored an eight-yard touchdown on a pitch that was classified as a run, but was essentially a pass.

This is the long way of saying that no matter how well Samuels performs catching passes during the preseason, it’s going to be hard to imagine Bell coming off the field very often to put the rookie on for receiving purposes. It would have to be a situation in which he is getting a rest.

Should Bell miss time, however, it would make sense to pair Conner and Samuels, with the latter serving more as a third-down back. Conner is working on and improving in the receiving department, but Samuels has already been drawing praise from his teammates with what he can do there.