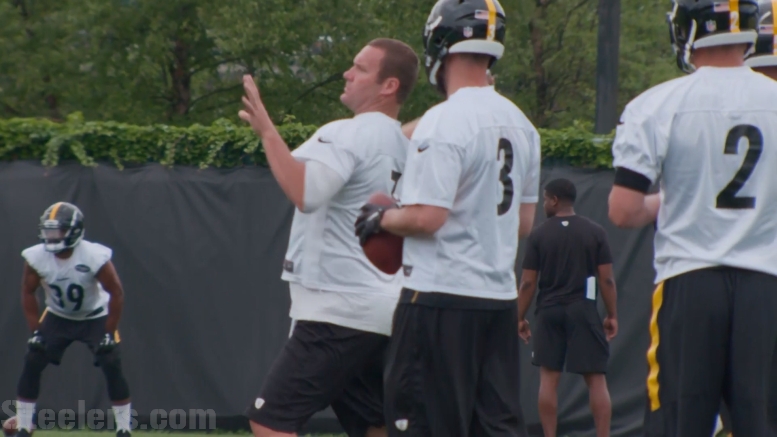 It’s hard to imagine a better situation for a rookie quarterback than the one Mason Rudolph is in. Playing behind a Hall of Fame quarterback, to sit and watch every day of Year One. But also being on the same team as another veteran, a guy who wasn’t blessed with physical tools like Ben Roethlisberger and has made a living off his preparation, work ethic, and football IQ. That’s Landry Jones in a nutshell and in the brief time the two have spent together in OTAs, Jones has already imparted some valuable wisdom on the rookie.

“He’s great,” Rudolph said when asked what kind of resource Jones is to him. “We were just talking out here. We were filtering through a new center. He was just giving me some tips on hand placement, and cadence, and voice inflection and stuff like that. He’s been awesome.”

Quarterback/center exchange was one of the early problems Rudolph had. That’s no surprise nor should it be a concern. Rudolph didn’t spend a lot of time under center at Oklahoma State, most centers out of college don’t have that experience, and there’s just a general “newness” with each player that it takes some getting used to. Rudolph didn’t even get to play in the Senior Bowl due to a foot injury so he hasn’t worked with any center since graduating from college.

But they’re things that have to be corrected by the time training camp starts. Dead balls in practice are just about the worst thing you can do, they kill a play that you don’t get to make up, and with four quarterbacks worthy of making the roster, there’s only so many reps to go around.

It’s no surprise to hear Jones helping out. He’s been in that position before, a wide-eyed rookie, and has been nothing but a professional throughout his entire NFL career. That cool-calm-collected mentality that’s made him a capable #2, ready to enter the game at a moment’s notice or be comfortable with being unsure during the week if he’ll start or not, given Roethlisberger’s will-he/won’t-he injury history.

It’s hard to give a higher compliment to a player in Jones who is willing to help out the guy who will eventually take his job, whether that’s this year or next. A cruel reality of the business but speaks to the character we’ve known about Jones for quite some time.

Mason Rudolph talks about the strides he's made since rookie minicamp, working with the veterans, throwing to Antonio Brown and more. pic.twitter.com/pmv2QMilnp