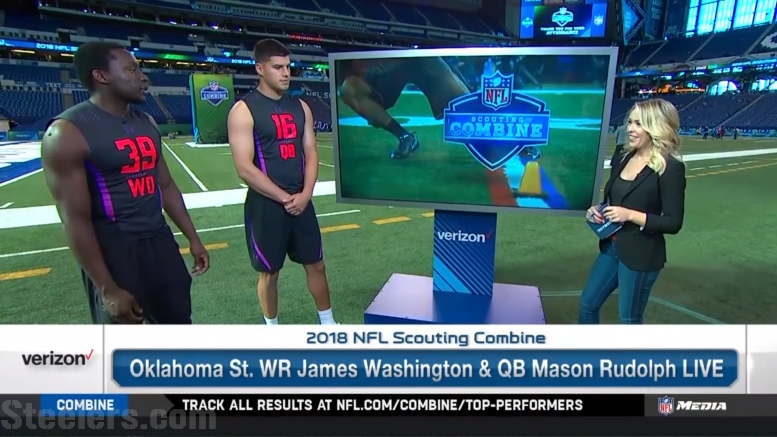 We’re going to have a lot to sort through over the course of the next several weeks and months in the wake of the Pittsburgh Steelers’ 2018 NFL Draft class. We not only have a number of new players to talk about (including undrafted free agents), we also have a wealth of interviews from players, coaches, and the general manager to mull over as we head into the football portion of the offseason.

One of the more intriguing storylines of the class though has to be the Steelers’ ability to bring in the highly productive pair of Oklahoma State teammates in wide receiver James Washington, selected in the second round, and quarterback Mason Rudolph, chosen a round later.

General Manager Kevin Colbert said during the team’s post-draft press conference that they were considering Rudolph in the second round (he was not asked if the quarterback was in consideration in the first round), but that they opted at that time for the wide receiver because he will help immediately, while the Steelers still have Ben Roethlisberger at quarterback.

This is the second time in recent years that the team has brought in a quarterback along with his receiver. When they drafted Landry Jones in the fourth round of the 2013 NFL Draft, they also added one of his wide receivers, Justin Brown, in the sixth round. Brown did hang around for most of two seasons on the practice squad and the 53-man roster. Jones remains here, but his roster spot could now be in jeopardy thanks to Rudolph.

Of course the Steelers did not intentionally pair Washington with Rudolph, which would be obvious if you simply realize that the wide receiver was taken first. Colbert talked about that after the draft as well, saying that “really one had nothing to do with the other”, aside from the fact that they saw the pair work together one tape and at their Pro Day.

“The familiarity was there when you saw Oklahoma State play, but really James’ drafting and Mason’s drafting would have happened independently of each other”, he went on, but allowed that “it’s good that they could come in together, it always helps to have a familiar face, especially as successful a pair as those two have been”.

Rudolph and Washington arrived at Oklahoma State together and left together, their four years overlapping and in that time forming a dynamic duo. The vast majority of their statistics thus were produced in tandem. Rudolph put up over 13,000 yards and 92 touchdowns with 26 interceptions. Washington had nearly 4500 receiving yards with 39 touchdowns, averaging nearly 20 yards per catch.

While they might have gotten along famously at the collegiate level, Colbert isn’t counting on that translating to the NFL, saying that “they’re going to have to re-prove themselves individually”. He also warned there’s no guarantee of “how many times they’ll actually work together. So it’s a new beginning for both of them, but I’m sure the familiarity won’t hurt”.