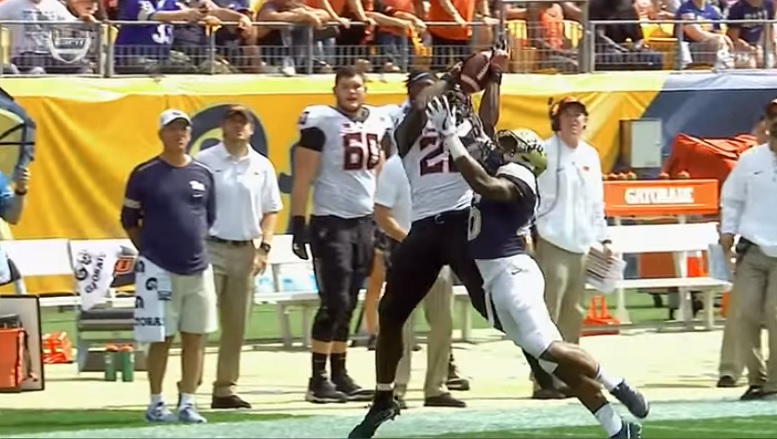 Is new Pittsburgh Steelers wide receiver James Washington going to be the ‘deep threat’ for the offense in 2018? You might shake your head and wonder how that would even be possible if you simply look at his measurables, but a gander at his college stats and game tape would tell you that it’s well within his bag of tricks.

It is what he was best-known for in college, after all. He averaged over 19 yards per catch over a four-year career with a substantial volume of work, so necessarily a lot of that must have come in chunks. Dave Bryan is already getting to work contextualizing a lot of that information now.

“We all kind of had a role at Oklahoma State”, Washington admitted recently during a sit-down interview with the Steelers’ website. “I was the downfield guy”. But more than just what he did on the field, it was also how he went about doing it that served a role for his teammates.

“For me I feel like I had the leadership role of just leading by example”, he told Missi Matthews. “I wasn’t really a big talker there but when I stepped on the field I gave 100 percent effort and everyone just followed”.

While JuJu Smith-Schuster’s youthful vigor and enthusiasm is a nice counterbalance in the team’s locker room, to have a more mature rookie coming in might be an asset as well, and he possesses that maturity both on and off the field.

There are some veteran-like tendencies in his game that are encouraging when you see on tape with respect to the likelihood of his being able to transition to the NFL and find success. One of the assets that will produce immediate returns is the fact that he embraces the physicality of the position.

“Especially when I’m running a route and it’s a go ball, a DB draped over you, I love it”, he said. “I play that into my part. It helps me catch the ball better in some cases”. This is another similarity to last year’s second-round wide receiver, which will hopefully allow him to find success quickly.

Still, Washington knows that he is coming in as the low man on the totem pole. Even with Martavis Bryant gone, there is still Antonio Brown, the best wide receiver in the game, and Smith-Schuster, coming off a very exciting rookie season.

“I’m just going to step in and try to match their abilities and match their tendencies on the field and I’m going to bring 110 percent effort”, the rookie said of trying to fit into the Steelers’ wide receiver group. “Whatever I can do to help the team win is what I’ll do”.