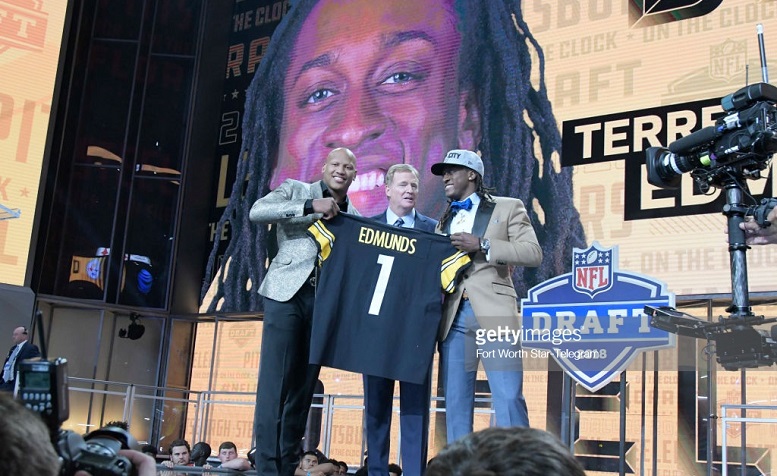 The Pittsburgh Steelers first-round selection certainly brought the element of surprise. First, NFL Commissioner brought out linebacker Ryan Shazier, who stole the heart of the nation when he walked to the podium to the announce the Steelers’ selection. From there the surprises continued, the pick was neither Justin Reid, a safety from Stanford, Derrius Guice, a running back from LSU or even Harold Landry, a sliding pass rusher.

Instead, the Steelers selected Terrell Edmunds, a safety from Virginia Tech, an unconventional move that few were expecting.

The Steelers rarely ever select a safety in the first round, in fact they have not selected a safety as early as Edmunds since 2003 when they took Troy Polamalu in the first-round.

Since then, the team has not found or needed a first round safety, fiddling with second to late round selections like Anthony Smith, Ryan Mundy, Shamarko Thomas, Gerod Holliman and Sean Davis. With a first round investment in the position, their first since Polamalu, the Steelers must believe that Edmunds could carry similar potential.

The raw similarities between the two are relatively visible as well.

A draft profile dated from 2003 of Polamalu from the Pittsburgh Post Gazette describes the former USC safety as “Fast, smart, tough, a safety who can hit and cover with the best of them.”

Edmunds is definitely fast, the Virginia Tech safety ran a blazing 4.47 40-yard dash, the seventh fastest of his position group. His speed translates onto the field where Edmunds shows the ability to close in quickly on plays coming in his direction.

Smart is another trait that matches Edmunds’ profile as the newly drafted Steeler was a team leader at Virginia Tech.

And last but not least, Edmunds is built tough. He stands at 6’1, taller than Polamalu, and weighs 217 lbs. This is a player who is comfortable playing in the box and playing hard nosed Steelers’ football. He showed grit, playing through a shoulder injury for the early portion of his final college season.

Edmunds is tremendously far from being the same caliber of player as Polamalu, however. The former Steelers safety went above and beyond his expectations, putting together a career that makes a case for being one of the best all time at his position while Edmunds has yet to take a single snap on an NFL field. But both represent unorthodox picks that were made in order to bring a new element to a rather orthodox defense.

Shazier was supposed to be the Steelers’ heir replacement for Polamalu’s playmaking abilities – a sideline to sideline defender who could swing the momentum in an instant. Unfortunately, that possibility remains on hold after his spinal injury. A defense that once required opposing quarterbacks to locate number 43 or 50 on any play has gone bland in their absence.

Edmunds is an unorthodox answer for a defense that has become rather orthodox.