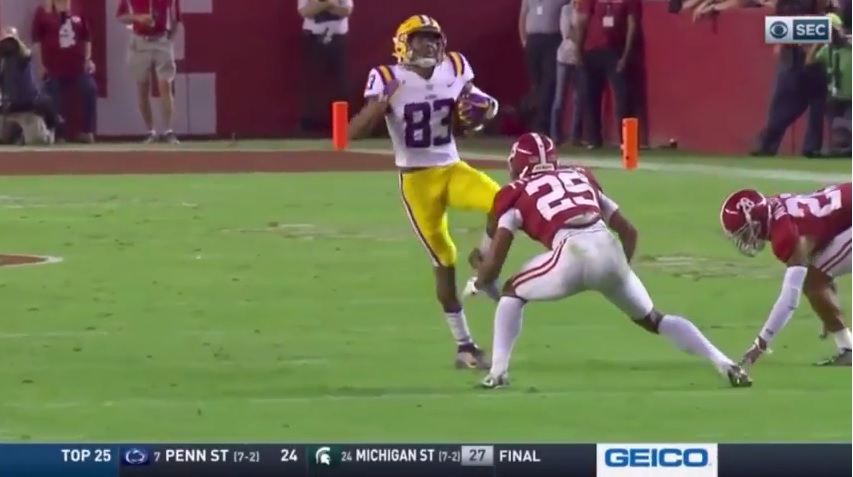 Just one visitor for the Pittsburgh Steelers today in the midst of a busy draft season. LSU WR Russell Gage Jr. is in the building Wednesday.

The Steelers have one player on a predraft visit today: WR Russell Gage Jr., of LSU

Gage had a quiet career with the Tigers though in a run-heavy offense, it’s difficult for any receiver to put up gaudy numbers. His best production came last year when he caught 21 passes for 285 yards and three scores. He also carried the ball another 21 times, averaging 8.3 yards per carry and a touchdown.

That included one nice hurdle over future first round pick Minkah Fitzpatrick.

He was also a standout on special teams, recording 11 tackles in 2017 and another six of them in 2016. That makes him similar to James Wright, a 7th round pick of the Cincinnati Bengals in 2014, essentially drafted for his coverage ability.

Gage moved from DB to wide receiver at the start of the 2016 season. Basically the opposite of what Brian Allen, the Steelers 5th round selection last year, did.

NFL Draft Scout currently has him ranked as their #81 receiver and he figures to be either a 7th round pick or a UDFA. The Steelers undrafted class should consist of anywhere between 10-11 players. Their roster currently sits at 72, bumping up to 79 after their seven draft choices. The Steelers have brought in 17 of their allotted 30 pre-draft visits. Gage is the second WR to come in, not including local visits. MTSU’s Richie James was the other.