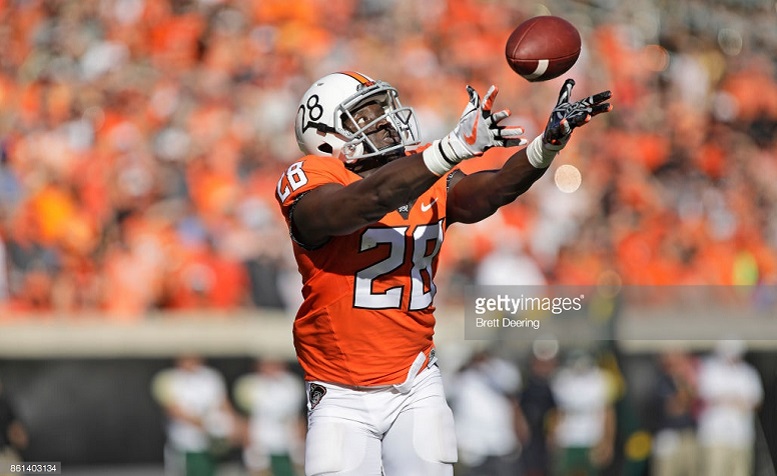 In trading Martavis Bryant, the Pittsburgh Steelers left a major hole on their depth chart. Friday night, they found his replacement in James Washington. I want to take a brief look at the “Z” receiver position and how Washington has the traits to take over that role left vacant by moving Bryant to Oakland.

In the Steelers’ offense, and I assume it’ll be the same under Randy Fitchtner, any receiver on this team has to be a vertical threat. The X, the slot, the Z, it doesn’t matter. They all have to win deep. But of course, Bryant was going to be a key vertical threat, the less refined route runner compared to Antonio Brown.

Washington, despite not having 4.4 speed, can be that vertical threat. At the bottom, watch him beat press coverage, rip through the corner so he can’t try to reroute him, and then beat him with speed over the top, bursting away and creating space the last five yards for the touchdown.

It’s a similar concept to what the Steelers ran under Haley (different scheme could happen under Fichtner, but you get the idea). This was Haley’s Z Indy Post. #2 running a dig to hold the safety, #1 running a post over the top. Here, in 2016, it’s Sammie Coates – who was also the Z – running the same concept here. The ball goes through his hands (surprise, surprise) but you see the similarities in the concept and the skillset required to win the matchup. Top of the screen.

Here, we’re just looking at Washington winning vertical. Again, bottom of the screen. I like how he gets up to speed immediately, not needing to build it. Manages to beat the corner despite off coverage and he’s able to stem vertically to create a little extra space at the top and he’s able to make a combative catch for a huge gain. Sorry it’s a little zoomed out – that’s on the camera man, not me.

I only have one clip here, so I know this isn’t the whole “route tree” but Washington – as Fichtner pointed out – has the toughness to win over the middle. Big-time traffic catch on third down with three defenders around him, running a 20 yard dig. And the Cowboys move the sticks in a critical part of the game.

Maybe Washington can offer more in that regard than Bryant did because he’s a tougher, more well-rounded receiver who isn’t as big as Bryant but plays to his size, which was an issue with MB.

Finally, the Z receiver is going to be responsible for a lot of the heavy blocking assignments. One, because the Z lines up on the right side more than the left (and the right side is typically the strength) and with Brown as your other blocker, the Z doesn’t have a choice. He’s the guy.

To Bryant’s credit, he actually did a really nice job in that regard last year. On the field, he looked like a team player, even if he didn’t always act like it off it. Washington, despite playing in a pass-happy offense, was a willing and physical blocker. Watch him on the bottom stalk block the corner into the sideline, letting the back cut upfield for another 10 yards.

Of course, Washington still has to prove all of this on the NFL level. There’s no guarantee, even with the Steelers mostly impressive track record. But he has all the skills I see this team needing in a Z receiver. Either way, we’re going to find out. One thing we know for sure is that Washington, like JuJu Smith-Schuster last year, isn’t here to sit on the bench.