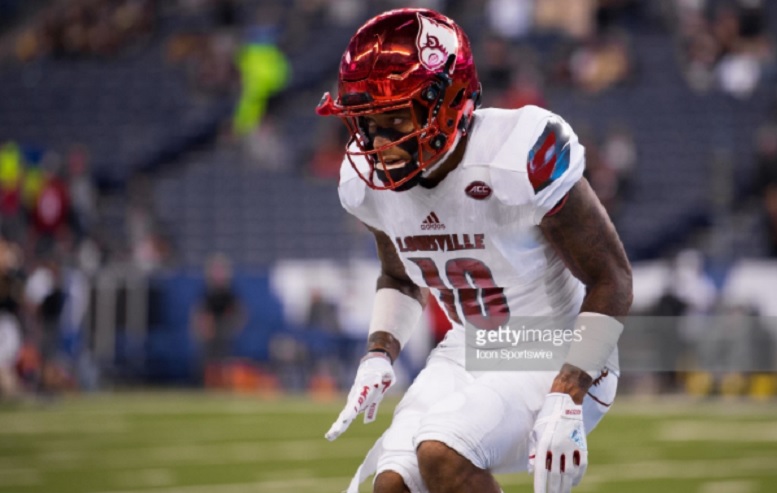 Major media draft analysts Dane Brugler released a three-round mock draft on Friday and to say that a few of his three selections for the Pittsburgh Steelers go against the grain would likely be a major understatement.

In the first-round of his latest mega-mock, Brugler has the Steelers selecting Louisville cornerback Jaire Alexander 28th overall and he writes of the pick:

The addition of Joe Haden helped, but cornerback is still one of the weak spots on the Steelers’ roster. Alexander, who is skill-set similar to Haden, might be undersized, but he plays bigger with his athleticism, toughness and ball skills.

The mocking of a cornerback to the Steelers in the first-round by a major media draft analysts is something we’ve seen happen just a few times this offseason. In his three seasons at Louisville, Alexander, who measured in at this year’s scouting combine at 5102, 196-pounds, registered 77 total tackles, 7 interceptions, 15 defensed passes and a forced fumble. He ran the 40-yard-dash in Indianapolis in 4.38-seconds and posted a 35-inch vertical jump and 10’7″ broad jump. His 20-yard shuttle time was great at 3.98-seconds.

While Steelers general manager Kevin Colbert and head coach Mike Tomlin were indeed both present at the Louisville pro day this year, it will be quite a surprise if Alexander winds up being the team’s first-round selection this year.

In the second-round of his mock, Brugler has the Steelers selecting Stanford safety Justin Reid with the 60th overall pick of the 2018 NFL Draft and he writes:

While he doesn’t have a dominant trait, Reid is well-rounded and will compete for immediate snaps.

Reid, who measured in at this year’s scouting combine at 6004, 207-pounds, is an incredibly smart and position flexible player with an NFL bloodline to boot. He played seven different positions during his career at Stanford — right cornerback, left cornerback, strong safety, free safety, nickel, dime and outside linebacker — and the 134.2 pSPARQ score he posted in Indianapolis is sure to have the Steelers attention.

The Steelers are expected to bring Reid to Pittsburgh for a pre-draft visit in the coming weeks after Colbert and Tomlin chose not to attend his Stanford pro day. It’s quite interesting to see Reid mocked this late as many feel he might ultimately be selected in the first-round, or by the middle of the second at the very latest.

In the third-round of his latest offering Brugler has the Steelers selecting Western Kentucky quarterback Mike White with the 92nd overall pick of the draft.

White, who measured in at the scouting combine at 6045, 224-pounds, completed 62% of his total pass attempts for 11,262 yards with 74 touchdowns and 31 interceptions during his college career that included him playing the final two years at Western Kentucky and his first two at South Florida.

Should the Steelers ultimately draft another quarterback this year one would think we’d see that happen in the first two rounds and not the third. In short, Brugler should have gone in a different direction with this pick and probably an inside linebacker such as Ohio State’s Jerome Baker.