In the unpredictable phenomenon that is the NFL offseason, there are just a handful of guarantees. These guarantees include the Cleveland Browns taking home the offseason Lombardi Trophy, the Pittsburgh Steelers re-signing a depth piece to a minimum salary and running back Le’Veon Bell receiving the franchise tag. For the second offseason in a row, Bell has received the franchise tag from the Steelers, giving the media and analysts more than enough time to analyze every possible angle of his future.

While speculation over Bell’s future production may have been beaten like a dead horse, let’s open up the conversation for just one more argument. The Steelers’ running back has been a workhorse over his career, amassing 1541 touches in his first five seasons. This is a staggering and cautionary number for a running back reportedly asking for unheard-of money for the running back position. Only 23 running backs have exceeded 1541 carries in their first five seasons and their rushing yardage, yards per attempt and yards per game have all been documented below. 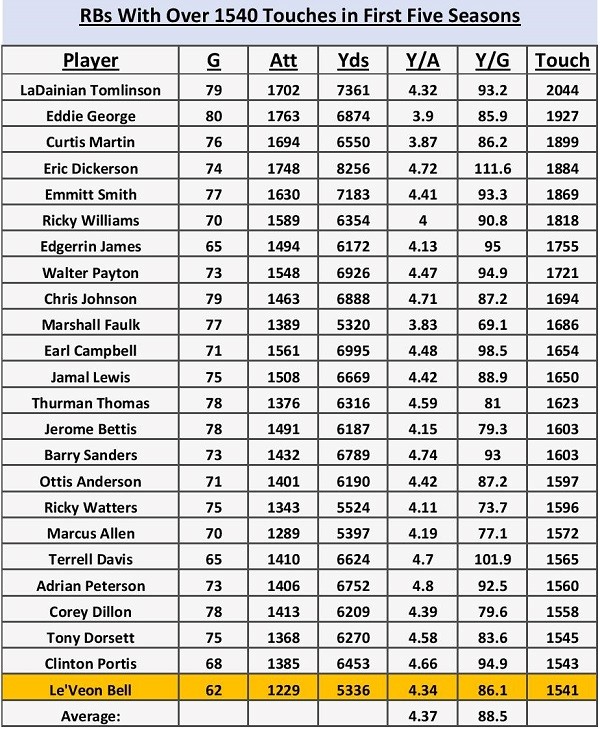 Among these backs with an insanely heavy workload, Bell ranks middle of the pack as his rushing yards per attempt and rushing yards per game line up closely with the group’s average. The Steelers though are not entirely paying him based off what he has done but the team is obviously also taking future production into consideration as well. While two dozen running backs have had a workload like Bell, how many sustained their production into their late 20s. With a checkered injury history, the Steelers’ running back certainly has his work cut out for him as he tries to convince the Steelers organization and perhaps the rest of the NFL that he can continue his production.

For Bell’s sake, let’s see how these 23 other running backs performed in the following three seasons. This will help show whether there is a case for continued production or if the wheels on these backs begin to show signs of slowing down. 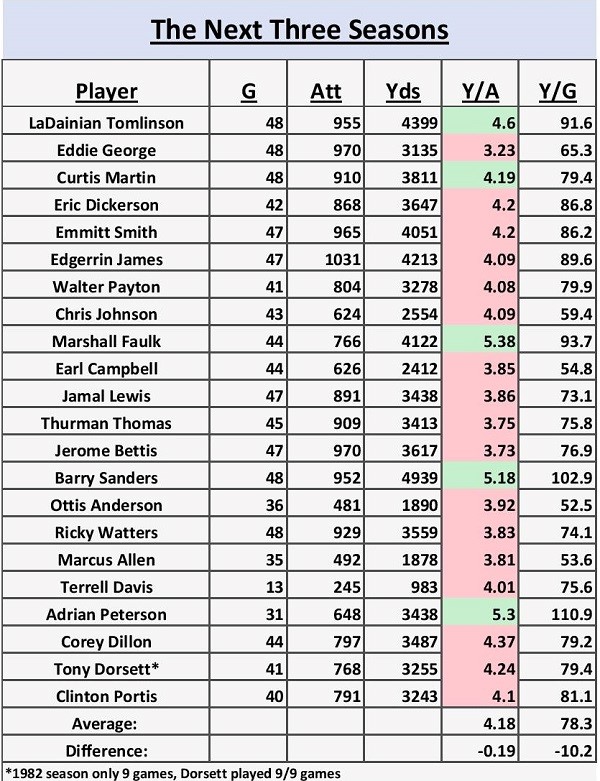 (Ricky Williams was left off this chart due to being suspended/retired for two out of the next three seasons, leaving the data with 22 running backs.)

Now that is not to say that Bell cannot join the likes of LaDainian Tomlinson or Barry Sanders and become the sixth running back to outproduce their five-year input, just the numbers are not on his side.

If there is one number riding on Bell’s side, it is surprisingly the health of these 22 running backs. Ten running backs (almost half) missed only one game or less over the next three years while 18 running backs played at least 40 out of 48 possible games. On average, the running backs featured in the data missed 5.5 games in a three-year span and this number decreases to 4.8 games if you omit Adrian Peterson’s 15 games missed due to suspension.

If the production is declining but the running backs are still healthy enough to play, it is easy to guess that wear and tear is the culprit for the decline. A car with high mileage may still run, just not as efficiently as when you brought it home from the dealership. The same can be said for the running backs studied above. With this knowledge likely already known by the Steelers, the team certainly has its reasons to not want to hand out big money and guaranteed money to Bell. It’s a tough sell for Bell as well, as the running back is not just asking to reset the running back market, he is asking to reset history.