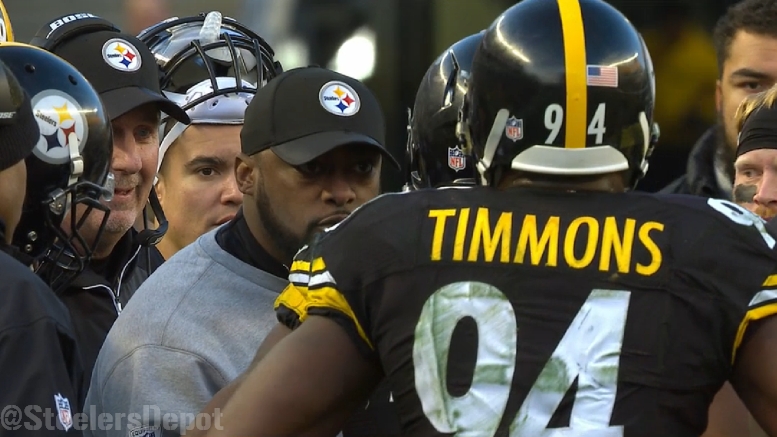 Now that the Miami Dolphins have officially parted ways with former Pittsburgh Steelers inside linebacker Lawrence Timmons, the debate can begin in earnest whether or not a reunion between the two sides is in order. While it might intuitively make sense, it is fair to question whether or not it in the best interests of either side.

According to Aditi Kinkhabwala, before talks about returning can be seriously considered, Timmons “he has to sort some things out [with] Mike Tomlin before that can even be a discussion”. From the manner of phrasing, it sounds more like bad blood on Tomlin’s side than on Timmons’, though that could be wrong.

All you #Steelers fans who believe a Lawrence Timmons reunion is a fait accompli… slow your roll. I’m told he has to sort some things out w/ Mike Tomlin before that can even be a discussion.

Their partnership lasted 10 years, and you better believe there was some favoritism, even if in good spirits. For example, Cameron Heyward has said in the past that Tomlin favors him in awarding him victories in practice during the ‘get-off’ drill. He’s Tomlin’s first son.

So perhaps he was hurt when Timmons signed with the Dolphins in free agency, earning himself a two-year, $12 million deal, of which $11 million was guaranteed before he got himself suspended, which triggered the voiding of those guarantees and enabled Miami to release him now.

It goes without saying that the Steelers are in the market for help at the inside linebacker position, and they did previously come calling for James Harrison after releasing him once before. There is a pretty solid history of reunions with former players under Tomlin; he even reunited with some of Bill Cowher’s players, wide receivers Plaxico Burress and Antwaan Randle El.

Before leaving, Timmons said that he wanted to finish his career in Pittsburgh. The Steelers also sounded as though they would like to see him finish up here. In the end, it’s hard to blame Timmons for chasing that guaranteed money before he uncharacteristically and still without explanation went AWOL.

Many are inclined to believe that he found the grass was not greener on the other side. All of those former players I alluded to above, when they returned, talked about it being a difference experience in Pittsburgh, and most expressed regret for leaving and chasing money or opportunities.

The Steelers prepared for life without him, however, previously having signed Vince Williams to a new extension, and they even ended up kicking the tires on Dont’a Hightower. No, perhaps he is no longer an ideal starter, but he can still play.

Evidently, the first hurdle is clearing the air between the two sides. After that, it’s a matter of agreeing upon a role and compensation for that role. What will his market value be to other teams? Will his deal prevent them from signing another player? Now that he is free, these are questions to start asking.