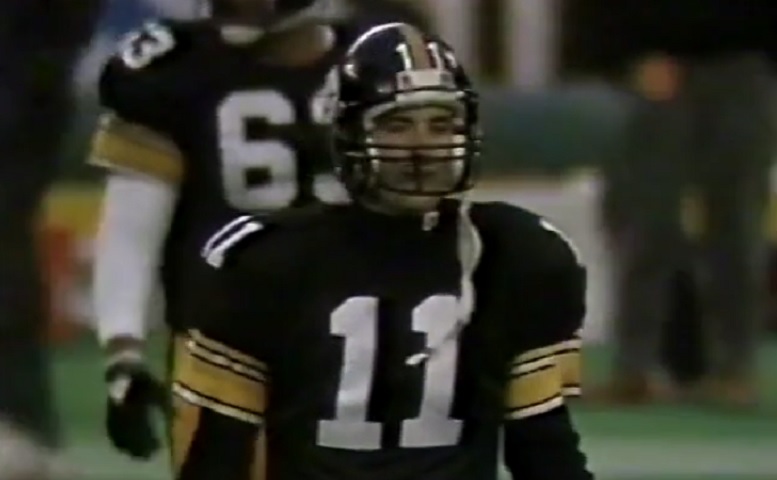 How many of you are old enough to remember when Rick Strom was the Pittsburgh Steelers backup quarterback?

David Todd and I were talking about Strom during the Monday podcast and so I thought I would do a quick post on him this afternoon.

Strom, a Fox Chapel product, played his college football at Georgia Tech. A two-year starter at Georgia Tech, Strom completed 178 of 357 passes for 2,077 yards with 11 touchdowns and 16 interceptions. He missed the final 5 games of his senior year with a broken finger on his throwing hand, however.

Strom signed with the Steelers as an undrafted free agent in 1988 but failed to make roster. In 1989, Strom again was back again competing for a roster spot and while he failed to make the final roster again, he was ultimately signed to the team’s developmental squad.

Due to an injury to starting Steelers quarterback Bubby Brister, Strom was signed off the developmental squad to back up fellow quarterback Todd Blackledge. Blackledge, however, was horrible in the games that he started and Strom ultimately overtook him later in the season for the right to backup Brister.

Strom played in nine regular-season games with the Steelers from 1989 to 1990, completing 14 of 21 passes for 162 yards while throwing an interception, which I was able to find a clip of and you can see it below.

Strom’s final three seasons in Pittsburgh with the Steelers included him being the No. 3 quarterback and thus he was always inactive on game day.

In 1994, Strom was the No. 3 quarterback of the Buffalo Bills and in 1996 he spent limited time with the Detroit Lions.

Strom’s final pass attempt as a member of the Steelers came during the following offensive possession after his aforementioned interception against the Cleveland Browns in Week 16 of the 1990 season. You can see that completion below that went to wide receiver Chris Calloway.

If you’re interested, here’s some more reading for you from the Pittsburgh Post-Gazette concerning Strom and his 1988 rookie training camp with the Steelers.