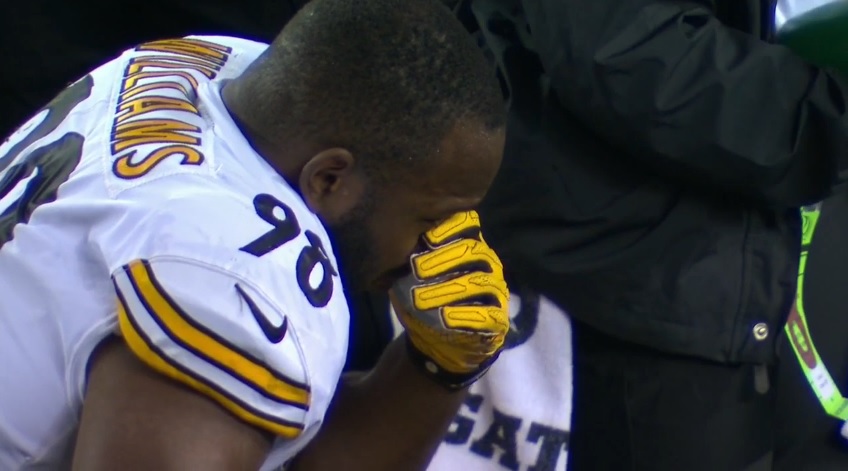 Greg Bishop of Sports Illustrated has a fantastic article on Ryan Shazier that you absolutely need to read. He goes through Shazier’s injury from the perspective of several teammates: Artie Burns, Mike Mitchell, and Vince Williams among others.

I’ll include a couple snippets here but seriously, go read the entire thing.

Bishop’s article highlights the close relationships Shazier has built since being drafted in the first round of the 2014 draft. How Shazier has become the bridge of the old Steelers’ defense to its current, ascending state. That when Shazier first met Mitchell, he told him he wanted Mitchell to mentor him and that he wanted to become a Hall of Famer.

Now, Mitchell is even more confident the Steelers will win the Super Bowl.

“I believe we’re going to win it now even more,” Mitchell tells Bishop.

Or when Shazier first spoke with Burns and told him he would teach him about the Steelers’ culture and history, a key person to lean on for Burns, a rookie in the NFL and trying to raise his two younger brothers at the same time.

Then there’s Vince Williams. I think everyone knows the close beyond between those two, dubbing themselves Shake ‘n Bake before the season began. The plan was for Shazier to rack up the interceptions and Williams the sacks. A plan that was coming along nicely prior to Shazier’s injury; he finished the year with three picks and Williams blew away all expectations with eight sacks.

Perhaps no one took Shazier’s injury harder than Williams. Mitchell recalls Williams being unable to compose himself until halftime, when teammates reminded him it was time to step up and be “the guy” with Shazier out.

“I don’t think Vince stopped crying until after halftime,” Mitchell said. “And that’s one of the most gangster dudes on the team. People had to grab him by the face mask and be like, ‘Yo, you’re the middle linebacker now. You can’t be sniffling.’”

The article doesn’t provide much of an update on Shazier’s current status. Players declined to go into details, which anyone should understand and respect, though they say Shazier’s recovery is going quicker than expected. That’s at least encouraging.

Aside from a few wonky factual problems with Bishop’s article (saying signing Joe Haden let Sean Davis play strong safety and Coty Sensabaugh in the nickel, both of which just aren’t true), it’s a really well-written piece and look behind the veil of what’s now one of the most motivating factors for the Steelers during their playoff run. Be sure to check it out again at the link here. It’s worth the 10 minutes of your time.